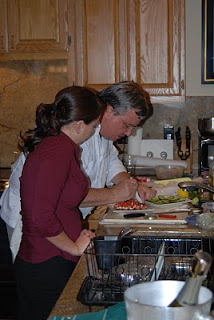 While I have intended my blog to be about wine, it is impossible not to diverge into food since the two are so insepearble. And so let me start with a tribute to Dave Cook, whom I am proud to call my friend. Attached is a photo of Dave with his daughter Emily, preparing a meal in my kitchen.
Dave has been a chef in Stockton for decades. Those of you old enough to remember Bagatelle may also remember that Dave owned that venerable restaurant which had an unfortunately short run. He was then the main chef at the River Mill, engaged in what one might call industrial cooking for weddings and such. He then burned out and settled into a less stressful career as a chef for a University of the Pacific fraternity. I hope those young kids in the frat house appreciate the hidden gem they have in their day-to-day feeder.
We are fortunate to have Dave at Larry Johansen’s Wine Wizard’s about 80% of Friday nights, cooking the weekly special. It is always something different, and always prepared with exquisite attention to detail that is the hallmark of Dave’s cooking.
Dave is especially well versed in the traditions of French cooking, which all chefs, I suppose, have to have as a foundation. He has, however diverged from what he calls the “Escoffier school” of heavy sauces and fatty foods. But he can still do it like the best when requested, as he did last night in my house with a salmon mousse on a bed of tomato sauce, blanketed with Hollandaise sauce. Or maybe Tournadoes Rossini, exquisite cuts of fillet mignon, covered with foia gras and sprinkles of truffle, and of course the necessary sauce. No one eats like that any more. I don’t either. I just wanted to try some Frech decadence, and who best to ask for but Dave.
As with most California chefs, Dave is well versed in the pillars of California cuisine, and could come up with a seemingly endless creation of artistic appetizers to precede a traditional French four course meal which also included a duck confit salad and profiteroles (made his way) aside from the above. His appetizers included baby potatoes stuffed with cream, smoked salmon & caviar, prawns on a cucumber with dill and aoli, Delta asparagus wrapped in proscuito which featured a Dijon mustard variant I had never tasted. And then there was phyllo stuffed with masala lentils and mango. It looked like traditional Greek tiropitas until you put one in your mouth. The flavor combinations were so unusual and incredible that I was amazed Dave could still surprise me with his creations after nearly 20 years of tasting his food.
For a chef well versed in wine and food-wine pairings Dave can often be found at Wine Wizard’s relaxing with a bottle of beer at the bar after he has finished feeding the clients. That’s when you can approach him and discuss anything you want. It has always amazed me that this man who prepares such exquisite creations to go with fine wine drinks beer that looks like infected piss.
Aside from his talent as a chef, another feature of Dave’s personality I admire is his strongly opinionated positions about cooking. He is no Bill clinton, catering to the crowds. For example he reels against what he calls “food towers”, plates designed to impress with their architectural prowess rather than their flavor. I love discussing new San Francisco or Vegas restaurants I sample with Dave and get his opinions on what I experienced. They are always enlightening.
Considering that most Californians think of Stockton as an uncivilized backwater, those of us who live here know better and recognize local gems, like Peter Jaffe and his Symphony orchestra. Dave is another such hidden gem, who I feel lucky to have experienced in my life.

WINE ON THE ROCKS?!