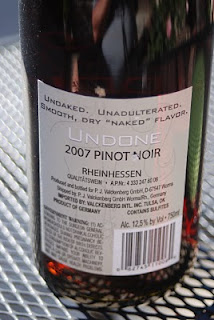 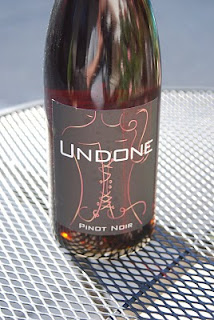 Why does obscenity offend us? Without going into some sociology term paper, I can summarize my answer in two words: because acts, images or words perceived as obscene are either indecent, or more commonly, unnatural.

I recently came across the bottle of wine you see in the pictures and had to buy it. It was a German Pinot Noir, and sold around $10. As you can see from the front and back label, it attempted a “sexy” image” in a clumsy way only Germans can dream up. That did not bother me much. However the wine, by its very existence, fullfilled my major criterion for obscenity: it is unnatural for pinot noir to be cultivated in a cold land known only for white wines like Germany.

I brought it to my Friday night tasting group for a quick round-up of opinions. The wine was thin, rough, lacking in fruit, extraction or finesse. Tasting it blind, my friend Mel, who posesses a superb palate came up with the best guess: red Sancerre. This region in the Loire, also a cold weather appellation known for its Sauvignon Blancs, has attempted pinot noir for a while and the results have traditionally been thin and worthless. Mel, like everyone else in our group, could not have known that Germany was now in the frey and making pinot’s even worse than Sancerre.

Now look at the back label again. They entice the customer with a trendy slogan: “unoaked, unadulterated, smooth, dry “naked” flavor”! They are attempting to capitalize in the new trend among wine drinkers to shun such excesses as overripeness, overextraction and overoaking. While I myself am an advocate of such restraint, I think that hiding a plain old bad wine behind the veil of this trend is downright indecent.

And there it is: indecent and unnatural, a good example, in my eyes, of viticultural obscenity.

As I think more about it, there is yet another angle to the obscenity metaphor. As you all know, perceptions of indecency change over the ages. Those bedroom scenes of 1940’s movies contemporaries might have considered obscene seem downright wholesome and certainly innocent nowadays. Some sexual acts previously unmentionable in public forum, are now accepted and discussed openly. What we consider obscene in one age can be acceptable in another.

I wonder if anyone in Burgundy, France, considered early attempts at pinot noir production from California or Oregon the same way as I did with this Rheinhessen. Chances are yes. Pinot noir is a fickle grape that takes years of experience to cultivate in new soils and climates. California and Oregon overcame their obstacles and succeeded with this grape. Why, even Sancerre winemakers have finally found their “mojo” and are releasing good pinot’s. Maybe so will the Germans. They will then cease to be offensive and receive acceptance in the family of pinot noirs.

Until then we can freely take potshots at them. But don’t forget to sample their attempts from time to time. At $10 you don’t have much to lose. And who knows? Some day you may hit a German jackpot.