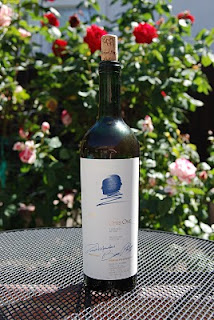 In my mostly Francophile wine circle there is an oft repeated claim that Napa Cabarnet does not age well. Certainly not as well as Bordeaux. On occasion we do encounter some that do amazingly well. For instance I ran into a batch of 1975 Villa Mount Eden several years ago that I purchased from an estate sale. All six were wonderful. Still, our collective notion is that at the very least, the ageworthiness in Napa is questionable, and inconsistent at best.
I was thus quite interested in experiencing a vertical of Opus One 1986, 1987, 1988 and 1989 that my friend Steve Cottrell generously brought forth from his collection, two bottles of each. Because of their steep price, current 2006 vintage retailing for around $145-165, these wines, at least in my circle, are a rarity. I certainly have never experienced such a comparative tasting.
Opus One is not exactly a typical Napa wine. Or is it?
Started as a joint venture between two mavericks one on each side of the Atlantic, the winery was a novelty in 1978. More eyebrows were raised in France, at the time reigning supreme over the wine world, that a top notch owner like Baron Philippe de Rotschild, as in Chateau Mouton Rotschild, a First Growth Bordeaux, would associate himself with a lowly American in Napa. As it turned out, that latter person Robert Mondavi became a legend in both countries. The winery was conceived as a Napa-Bordeaux hybrid and has been producing red Bordeaux blends since.
My overall tasting impression was that these wines are more like Bordeaux than Napa Cabarnet’s. They were all alive and well despite their two decades plus age. Each vintage featured a different blend. Two that had more Cabarnet Franc in the mix the ’86 (9%) and ’88 (13%) had much more prominent smoky, peppery old-Bordeaux-like noses than the other two that did not. The ’87 featured only 3% cab franc and ’88 only 1%; their noses were quite subtle and indistinct. I found it interesting that cab franc added such distinction to the age. All had good fruit upfront, but variable acidity, tannin and finish, as one would expect from different vintages. For instance the ’89 had more seductive fruit upfront, but later featured the most tannin, and went well with food. They were all reasonably well balanced.
What they did NOT have were eucalyptus characters I associate with such Napa wines as Heitz or BV, hints of mid palate sweetness so typical of most domestic cabarnet, or prominent oak in the finish, now an epidemic around the world, especially California, Spain and Australia. In what they lacked they were most definitely Bordeaux like.
The tasting seemed to disprove our adage about the ageworthiness of Napa Cabarnet. But then, they really seemed to stand apart from the breed.
Moris Senegor WINE RECESSION IN CALIFORNIA IS OVER

UNOAKED CHARDONNAY: IS IT ANY BETTER?