UNOAKED CHARDONNAY: IS IT ANY BETTER? 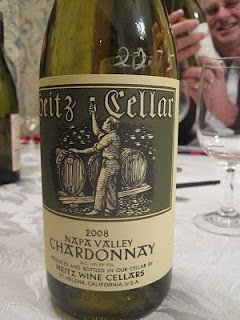 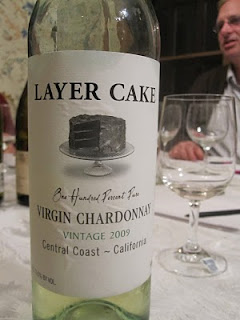 Those of you who follow my wine postings, by now know well that I have a love and hate relationship with New World Chardonnay. On the one hand I am sick and tired of it, and have been so for over a decade, on the other I secretly drink some occasionally to re-test my tolerance for buttery, sweet, tropical flavored, and most of all vanilla and oak finished wines. More often than not I am disappointed. It was thus no surprise that I came up with a novel suggestion for our monthly themed tasting group at George Heron’s house (George owns Fine Wines of Stockton): unoaked chardonnay.
I first encountered this label in, of all places, Canada, in the Ontario wine country near Niagara Falls, south of Toronto, in 2004. I thought, “wow! Someone finally is acting reactionary here.” Since then unoaked chardonnay as an alternative to the ABC crowd (anything but chardonnay) has gained some more traction, with such labels popping up here and there, seemingly at random. I thought it would be interesting to assemble a few and compare them. My fellow tasters jumped at the idea, as though I had proposed the one thing none had thought of but wished they had.
In the lead-up to the tasting, I discovered that if you specifically target “unoaked Chardonnay” labels in wine shops, they are pretty hard to find. Some have none, other may have one, maybe two labels tops. Seven years after I first spotted the concept in Canada, it still remains on the fringe.
We assembled 7 bottles for the tasting, most young (2009 was the most common vintage), representing various regions including Australia , New Zealand, Washington State, our backyard Lodi, Central Coast, and Napa. A good cut across the New World. The wines were all over the place in style and quality, replicating in their heterogeneity the regular oaked chardonnay. One feature that came out in many was the presence of vanilla flavors in many, despite the lack of oak. It is an innate characteristic of the grape. Some were full of tropical fruits, others citrusy; some were very subtle, stripped of all character for the sake of minimalism, others invested in characters that they should not carry.
The two worst wines carried what I consider a cardinal sin for winemakers: they had no indication whatsoever of the varietal they represented. One, a 2009 Yalumba from South Australia had no nose and tasted like bottled water with a slice of lemon in it. If I was truly blindfolded in a blind tasting, I might not have guesssed that this was wine. It was minimalism at its worst. The second, a 2010 Borra, a local Lodi wine was worse. It had a perfumy Viognier nose, and a Riesling-like flavor profile. Chardonnay? No way!
The two best wines had some balance and acid, and seemed drinkable. One was from the venerable Heitz Cellars, 2008. George who brought this indicated that it has a tiny bit of oak in it, not much. So he felt he could include it in this tasting. The other was an obscure wine called, of all things, “Layer Cake”, with a picture of a cake slice on its label, from King City in the Central Coast inland area. It boasted in its back label that “this wine has not been mauled by any oak”. Mauled? Some are getting downright militant about the subject. But it was an easy drinking wine at a cheap price (around $12), and the only truly drinkable, best balanced wine of the group which did indeed not have any oak.
In the end George made the most fitting comment about the experience: “to me, if you want unoaked Chardonnay, Chablis is your best bet.” My sentiments exactly. As for me, I brought my own spit bucket, refusing to swallow that which was unworthy, and returned home sober. Then I opened a bottle of Pinot Noir.