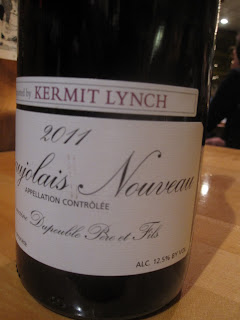 As we enter the traditional holiday period of autumn and winter, a new tradition that I find most annoying  has ingrained itself within the wine world: parties and celebrations that mark the arrival of Beaujolais Nouveau. Last night our local Wine Wizard’s was, as usual bursting at the seams as frequent and infrequent customers all flocked the place and devoured all seven cases of the wine Larry, the owner managed to procure. I am sure the same scene was repeated all over the U.S. among wine aficionados.

My wife and I were among the minority of Larry’s clients who refused the stuff, despite numerous entreaties by the waitress and our table mates. I stuck to my guns and told them I was, “not drinking no Beaujolais Nouveau”, and selected a nice bottle of Domaine D’Auphilliac to accompany the New York steak that was being served.

Located immediately south of the famed Burgundy region of France, Beaujolais remains a poor step-sister to its more illustrious northern counterpart. It is however, often classified as a Burgundy in many wine books and maps, much to the annoyance of the more uppity pinot noir producers on its northern border. Beaujolais after all, is made of the lowly gamay grape that just does not command nearly as much respect as the somewhat regal pinot noir.

Thus relegated to an obscure corner of the wine world most of the year, Beaujolais manages to steal the limelight for one special autumn weekend when it jumps the gun and manages to produce and ship the first wine of the same year harvest. To my knowledge there are no other winemakers that successfully associate their products with the “fall harvest fruit” aura that Beaujolais Nouveau evokes. The whole thing is a clever marketing ploy, akin to having diamonds associated with nuptial love, that the public has swallowed hook-line and sinker.

So what’s wrong with everyone celebrating a rustic harvest tradition as the fall leaves begin to fall? None, except that Beaujolais Nouveau is an absolutely terrible wine. Hastily made and shipped, it is glorified grape juice with no nuance or redeeming qualities. You may as well go suck juice fermenting out of any wine barrel anywhere. Yet worse, Nouveau (means “new” in French) manages to steal the spotlight from well made Beaujolais, so called Cru Beaujolais, the existence of which remains a well kept secret for most wine drinkers. The 10 appellations within this category such as Brouilly, Fleury, Moulin-a-vent to name a few, express surprising elegance and subtlety from the much disrespected gamay grape.

A table-mate at Wine Wizard’s absolutely insisted that I try at least a sip of the 2011 Beaujolais Nouveau which came out of the bottle you see in the picture. So I did. Indeed, it was as awful as it always is.