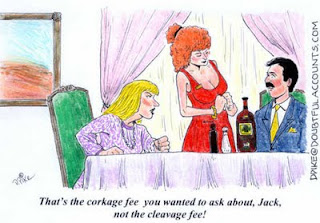 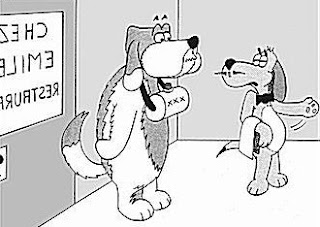 Several years ago I visited an old college friend Kevin Cronin in his home town Philadelphia and discovered a fascinating detail about life in that city which is entirely foreign to us Californians: all their restaurants were BYOB. Through some arcane quirk in their liquor laws, restaurants were not allowed to sell wine. So they did not have any wine lists. Customers who wished to consume wine with their meals had to bring their own. And we did. In fact we found another wine enthusiast couple in that restaurant with several interesting looking bottles, and we combined forces with them into an impromptu tasting of around 5 bottles, with a lively discussion about what else, but wine. At the end of the meal there was no corkage charge. Just the cost of the food ordered.

I don’t know if Philadelphia is still the same, but the experience was a liberating one. No hassles with ordering wine, which we in California know all too well, and no concerns about outrageous corkage fees. For those of you who don’t know the meaning of the word, “corkage” refers to a fee a restaurant charges clients who bring their own bottles and request that this be consumed rather than wine from the restaurant’s list. In Bay Area restaurants this fee currently ranges from around $15 all the way up to $80 or so in some very uppity restaurants.

The rationale behind corkage is that the creation and maintenance of a wine program is costly, and this overhead cannot be recouped unless customers buy wine from their lists. If all customers brought their own wine, as in Philadelphia, the cost of their wine program could potentially sink them. Therefore they attempt to recoup part of their wine costs from those who choose to partake in their own bottles by charging a fee. Simple as that.

For most restaurant-goers however, this becomes a dilemma. On the one hand are outrageously expensive mark-ups, on the other a fee for opening a bottle that they have already payed for. Restaurants have a rationale for their mark-ups of course, and it is none other than the same as above: it is necessary to recoup the overhead of maintaining a wine program. In reality, as you might have guessed, restaurants use their wine and liquor programs as their main profit center, gaining substantially more from these than the food they sell.

So what’s a person to do? One the one hand are extremes like my friend Dr. Padmesh who brings his own wine to every restaurant on every occasion. He has a very large collection and not enough life expectancy to consume it all. That’s why he does it. I recently read about the famous violinist Itzhak Perlman who is apparently a major wine enthusiast, and leans towards high end, hioty-tioty labels. He apparently also brings his own on every occasion and suffers through outrageous corkage fees. Apparently in New York City where he resides, the fees are even worse than San Francisco. On one occasion he apparently paid $1400 in corkage!

On the other extreme, you can forgo wine at restaurants and order Pepsi or beer. Many did this in the midst of the recent recession for no idealistic reason. They simply did not have the discretionary income to blow in restaurant wine lists. Some I suppose do it as a matter of principle, in protest of restaurant abuses of wine and corkage prices.

I personally take a middle of the road approach. I only bring my own wine to a restaurant if I already know that the particular establishment has a poor or deficient wine list. This tends to happen more in Stockton than in the Bay Area. I also bring my own bottle to a ceremonial occasion, such as wedding anniversary, and such bottles tend to be apropos of the occasion. No two-buck-chuck or Gallo, but rather unique labels, usually with some age that have been sitting in my cellar just for that purpose.

Otherwise I enjoy exploring different wine lists, and learning from them. My recent blog about a Valpolicella I discovered in a San Francisco restaurant is a good example. I also enjoy the occasional repartee with a friendly, down to earth sommelier, and his or her suggestions. I do have one advantage over the average restaurant patron however, which I proudly proclaim. Over the years I have developed, cultivated I should say, the art of finding a good quality but bargain priced wine in just about any wine list. Believe it or not, they are always there if you look hard enough, and if you can stray away from the ever ubiquitous chardonnay, cabernet sections of the lists.

Philadelphia was a novelty for me, but in the long term, if I lived there, I probably would find its BYOB style tiresome, my own frustrations with some Bay Area prices notwithstanding. Looking at the cartoon above, I should be glad that no one is charging any fees for cleavage, or good looking legs for that matter. In this regard women have an advantage. There are substantially more good looking waiters than waitresses in most restaurants I frequent. Why? I don’t know. But then, once the wine starts flowing, who cares?!

HOME AND AWAY IN WHITE