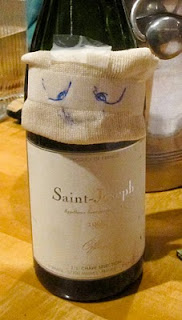 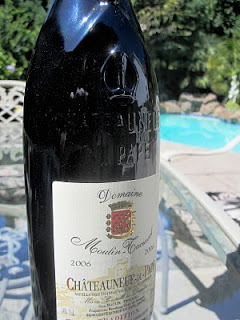 For those of you who have never played the game of guessing what the wine in a concealed bottle is, I wanted to share some of our tips on how to impress others with seemingly magical identification powers only master sommeliers posses. The trick is to not use just the nose and palate, but rather anything and everything that all five senses might reveal about the mystery wine. In this regard your eyes and fingers are almost as important as your nose and tongue.
The most basic differentiation is between what we call sloped bottles versus shouldered bottles, as noted in the photo at the bottom of this blog. This distinction significantly narrows your varietal and regional guesses. For instance pinot noir never comes in a shouldered bottle; Bordeaux wines never come in a sloper; Burgundy wines never come in a shouldered bottle. Obviously one has to have a general knowledge of what comes in what bottle, but this is much easier to master than the infinite combinations of noses and palates out there. Also, there are certain wines that can come in both, for instance wines from Tuscany or Languedoc, or domestic Syrah. This basic guess, which takes one look at a bottle or, if the bottle is concealed, a simple feel of the neck, gets you half-way there.
The next guess has to do with the mouth of the bottle. There is a lot of information there. For instance, if there is musty looking, white stuff in the mouth, it’s a good bet the wine has been sitting in some cellar for many years, i.e. it’s old. If the mouth has grooves, then it had a screw-top bottle cap. This is very helpful information, for currently there are still few screw tops and they are restricted to the New World. It is most commonly New Zealand, Australia, or somewhat less commonly California. Mouths with a ring of lip around them are always New World, and most commonly California (and usually cheap wines like Gallo Turning Leaf), South Africa or South America.
The color of the bottle is also a good hint. Most wine bottles have a greenish tinge. Bottles with a brownish tendency are most commonly Italian.
Finally there is one feature of wine bottles that especially appeals to us doctors, since it challenges our talent for palpation, a skill acquired early in our training in Medical School: embossings. The quintessential embossed wine is Chaeauneuf du Pape. The top left photo demonstrates one such embossing; it happens not to be the classic Chateauneuf design, but it gives you the idea. The embossing is usually above the front label, and can be easily palpated by those who know what they’re looking for. But beware! There are other wine regions that employ the same device, and while most blind wines that are embossed in our tasting world still belong to the Southern Rhone (Ch. du Pape, Vacqueras, Gigondas, Rasteau), this feature can at times lead you astray.
However, whenever we smell a Southern Rhone nose in a mystery wine during our Friday night tastings (a peppery syrah nose with hints of tobacco, bacon or cigar box), we almost instinctively reach for the bottle to seek and palpate that embossing. If it’s there, most likely we have a Chaeauneuf, if not we think of other choices.
Now you might say, “isn’t all this cheating?”. Well it’s not exactly the World Series or Super Bowl; it’s just a fun activity we do with friends once a week. So, yes, maybe. But who cares? After all, none of us profess to be master-somelliers. However our guessing-power, with the tricks unrevealed, still impress newcomers and guests to our tastings.
Knowing each other’s tendencies, we do attmpt to fool our fellow tasters by concealing the well known embossing in various ways. The easiest is to decant the wine and not reveal the bottle until it’s served. But this maneuver, well known in the group, is immediately suspect, and combined with that distinctive French Syrah nose, leads to as easy a guess as palpating the bottle. So we have taken to concealing the bottle in various creative, ingenious ways, like wrapping it up as though it was a broken limb, choosing especially thick wine sacks, or sacks with rough surface contours, and numerous other concealments.
Last night, Bob Brown decided to serve us with a reverse trick. A sort of wine-bluff, if you will. He applied what we would consider an obvious concealment on a bottle of St. Joseph Offerus, a Northern Rhone wine (pure syrah), which does not have any embossing on the bottle (top right picture). In fact no wines from this region do. We should have known something was up, because he kept encouraging us to feel the bottle while we were still tasting and guessing the wine. I think he thought that if we felt his patch, an obviously clumsy attept at concealing an embossing, we would think it was Chateauneuf. As it so happened, no one fell for it, and no one felt the bottle. We guessed it wrong as Chaeauneuf anyways, because of our nose and palate experience. But we did not “cheat”.
It was still cute – in a deranged sort of way – to see his smily face on the makeshift patch, his practical joke on us. This new trick now creates doubt about whether obvious concealments are authentic or bluffs. And the game goes on.
Moris Senegor 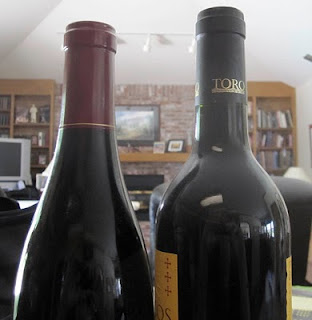 GLORIA AND THE 1855 CLASSIFICATION