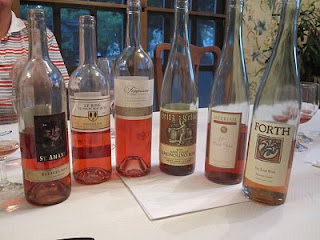 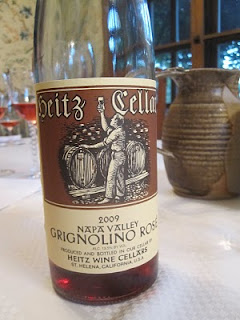 Rose wines are the Rodney Dangerfield of the wine world. Does anyone give them respect? When I first joined my wine tasting group in the mid 90’s, there were some that seemed to, because we actually had aged rose’s show up in our Friday night tastings. But then they were brought by he same people who were aging Beaujolais Noveau who, fortunately have since ceased and desisted. We hardly ever get a rose in our main wine group.
For those familiar with it, rose wine is a great summer sipping drink. Uncork and guzzle. Light in alcohol, unchallenging in flavor and complexity, just a pleasant, mindless experience. I was thus taken aback when George Heron, the leader of my second wine group, suggested a rose tasting for a mid-July themed event, in honor of the summer. I was not surprised by the season, but rather with the fact that we would be trating these wines seriously and in par with the likes of Bordeaux, Pinot Noir, and various other noteworthy varietals we seriously evaluate at George’s house.
And so we ended with a hodge-podge of BYOB bottles that night, as you see on the top right picture. They were all domestic except for a St Emillion Rose I brought from K&L (09 Pavie Macquin, $ 9) which made a mediocre showing. The others included one local bottle (09 St. Amant Barbera), and three from the Sonoma region (09 Foppiano Petite Syrah & Pinot Nr, 09 Merriam, NV Forth). They were, well, what can I say? Roses! Pleasant but undistinguished. Nice summer drinks, most of them cheap.
The tasting was blind and one bottle stood out as though it was a color movie in a bunch of black & whites. It was a pleasantly prominent floral character that distinguished this wine from the rest. We all loved it except for George (but then this is not unusual; George’s palate, well trained as it is, tends to be quite eccentric and warped like the rest of his personality). Guess what it was?
09 Heitz Cellars Grigolino rose!
This is an old classic standby that we have all consumed, – guzzled is more like it -, for over a decade. It used to retail for around $ 7 per bottle when I discovered it. Nowadays it is in the vicinityof $12. Not a summer has gone by in the last 15 years that we have not collectively consumed many cases of this wine.
Grignolino is an Italian grape grown in the northern Piedmont region, and in its red form makes an intensely floral, fruity wine with citrusy characters. My M.O. for identifying this wine in blind tastings is that it is a red wine that has white wine flavors and characters. Heitz Cellars, a venerable winery in the Napa Valley, better known worldwide for their classic Cabarnet Sauvignons, has been making Grignolino both in its red and rose forms since their inception in 1961. And their rose remains a favorite among those familiar with it.
It was interesting that without guessing what it was, we all levitated towards the Heitz as the most distinguished rose among the bunch we tasted. I suppose maybe we are all conditioned to like it. But then maybe not. Maybe it is unique and seductive, and a notch above other wines in its otherwise poorly respected category. And it is cheap to boot.
Moris Senegor