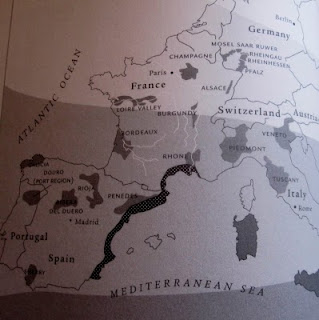 All wines grown around the world obey certain geographic rules. One of the most basic of these has to do with certain latitudes around the globe within which wines can be classified into specific climate zones. Vineyards can only be successfully planted around latitudes of 20 degreess (Yucatan, Cuba, Northern Egypt, Taiwan) to 50 degrees (Vancouver, Newfoundland, English Channel, Northernmost Japan). Farther north is is too cold, and near the equator it is too hot for commercially succesful winemaking. Thus one can plot two strips around the world between these latitudes, one in the Northern Hemisphere, another in the Southern, in which vines grow in three climate zones, cool, moderate and warm, themselves forming smaller strips within.
If one then steps out of the varietal or appellation way of thinking about wine, and into a climate zone “box”, an amazing revelation can unify the bewildering array of world wines into something an average human brain can comprehend: all wines within like climate zones have similar characteristics. This applies not only to certain varietals that grow well in certain climates, but, amazingly also to noses, flavors and compositions. Anyone who wants to explore this further can read an excellent book for wine beginners by Andrea Immer entitled “Great Wine Made Simple”.
My case in point is a surprise bottle that arrived in the mail the other day from Steve and Shira Klein, a couple I met in my Sonoma bikeriding trip this past June. They live in Ann Arbor Michigan and like most who live in this well known university town, express a good deal of open minded intellectual curiosity. This certainly was apparent in their exploration of the Sonoma wine world during our trip, and in their attention to my inebriated ramblings about the topic. As wine has become more valuable in the U.S., just about every state in the Union has developed regions where they grow vineyards. I was thus not too surprised when I opened the Fed Ex box from the Kleins to find a 2007 Riesling from their home state, with the label Bel Lago, from the upstate Leelanau Peninsula (see picture below at the end of the Blog).
Us Northern Californians at the epicenter of the U.S. wineworld look down at the remaining 49 States as inferior until proven otherwise when it comes to wine production. Thus my first impulse was, “oh, another crappy wine from an unknown state”. I wondered what kind of polite response I would need to devise for this kind gesture from what I considered a pleasant couple. I then subjected the bottle to the same treatment I do when receiving such unusual gifts: bring them to my wine group, taste it blind and get a collective opinion on it. The results are generally so dismal that they make for funny anecdotes for years to come. This bottle was to prove an exception.
The Bel Lago showed surprisingly well in our wine group setting. It had a classic German style, more in line with Rheingau than Mosel Saar, on the sweet side as such wines tend to be, but well balanced and well made, although it lacked the usually prominent nose of its German counterpart. Naturally no one in the group would even imagine that the hidden bottle was from Michigan. Comments included, “a pretty good Kabinnett with lots of minerality”, “a mouilleux chenin blanc’, and “I don’t know what it is but I like it a lot”.
The Leelanau Peninsula which juts into Lake Michigan near Traverse City, mirror images its counterpart the Door County Peninsula in Wisconsin, and is located around the 45th parallel (Latitude 45 degrees North). The appellation has 18 wineries, making mostly cool weather wines such as Pinot Gris, Chardonnay, Riesling, Gewurtztraminer, Cabarnet Franc and Pinot Noir. Some publicity material from the area boasts that the 45th parallel is the home of such famed wine regions as Alsace, Bordeaux and Burgundy. While the claim is nearly accurate (Bordeaux 46 degrees, Burgundy 44, Alsace 45), the comparison is not. The Gulf Stream in the Atlantic that warms Europe creates warmer climates there, especially near the Ocean (Bordeaux) than the inland cooler climate of Northern Michigan. The band of weather zones around the globe does not follow a straight course but rather curves around a bit to accomodate such local climate characteristics.
In the European climate map you see above on the right two large swaths of grey cover Northern and Southern europe. The light one painted over Northern France and Germany denotes the cool climate zone, the darker along Central & Southern France, Spain and Italy, a moderate climate zone. The German characteristics of the Bel Lago from Michigan at 45 degrees north actually coincide with their counterpart at 50 degrees of latitude for Rheingau. In this regard they are both at the northernmost border of commercially viable vineyards in the Northern Hemisphere and thus have like tastes.
All these technicalities of vineyard geography aside, the Bel Lago experience serves as a good metaphor for the unifying power of wine. No matter where around the globe one is, wines can be found that taste similar to their counterparts in other continents, making our world smaller in yet another way. And sharing the experience with new acquaintances thousands of miles away, helps solidify budding friendships. 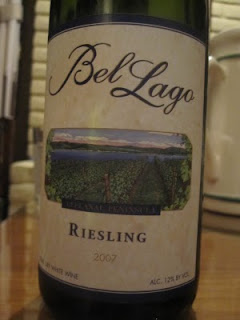 FINALLY, AN OCCASION TO OPEN A 3 LITER