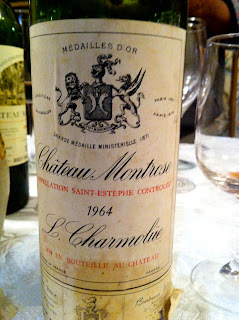 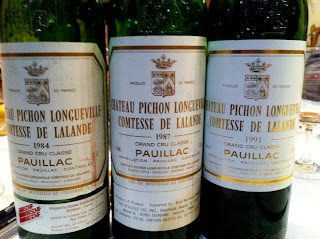 I have touted the virtues of off-year Bordeaux wines in past blogs. Recently we journeyed into this world deeper with a tasting devoted to inferior vintages with bottles assembled from various vendors and our personal collections. It took place in the house of George and Gail Heron, proprietors of Fine Wines of Stockton, with 10 tasters in attendance. The driving force behind this was Mike Hernandez of Fresno, who spent the last six months scouring merchants for such wines. He contributed half the bottles to the tasting (many others he bought were not included because some were actually good vintages, and others large or small format bottles).

Our line-up of 8 bottles was as follows:

The tasting was quite interesting, given the diversity and inferiority of the vintages. To begin with, unlike many other themed tastings where all the wines smell and taste alike, and one has to search hard for nuanced distinctions between them, here we found ourselves in a dizzying kaleidoscope of  styles and sensations.  The differences were so extreme that in between each tasting I took to thoroughly rinsing my mouth with water which I then spit, to clear my palate. The more familiar morsel of bread would have done no good.

All the wines in the line-up featured imperfections, most common being subtle, unfamiliar or plain old defective noses. A big debate erupted about the 1964 as to whether its nose was cork or just old age. George and I came on the side of the latter, a few others vocally insisted on cork, and some abstained. We all did agree that the 1964 was too old. As I put it, “I wouldn’t drink the whole bottle, but as a tasting it was interesting.” This exemplifies, or rather confirms a time tested, almost axiomatic adage about off-year Bordeaux: they are best when consumed young, and should not be cellared for decades.

But then another discovery caught us by surprise. The 1981 Lynch Bages trumped the 1997, its 16 year junior in quality and likability. Most at the table agreed on this point. What gives?

Here’s the second important point about off years: not all vintages declared by pundits as inferior are so. Some years suffer from being too close to grand years and being seen as inferior by comparison. 1981 was such a year. Completely overshadowed by the grand 1982 vintage that changed the face of Bordeaux, not to mention initiate the steady price inflation still in effect, 1981 was much maligned, when in fact it was a good year. There is no better proof than the two Lynch Bages of our tasting.

The most reliable demonstration of quality in Bordeaux is longevity over many decades. This was well noted by the best showing of the night, the 1991 Pichon Lalande. Categorized by some as a “super-second”, almost in par with the rarefied First Growths, this is a charming wine for those lucky enough to taste it regularly (I do so thanks to good friends who generously open theirs). Even though 1991 was authentically inferior (unlike 1981), this 20-plus year Pichon held up well, because it comes from a good winemaker. But I would not keep it for 50 years, as George did with the 1964 Montrose which was his contribution to our tasting.

Mike Hernandez told us he found the ’91 Pichon in some obscure Fresno liquor shop for $53. K&L (a big San Francisco wine merchant) is currently selling one for around $150. This I suppose is my final point about  Bordeaux in off years. These vintages make themselves amenable to treasure hunts. With storied, much ballyhooed years you can forget bargains in forgotten corners. As Mike will attest the thrill of the hunt and his discovery of bargain purchases was probably more satisfying than the tasting itself. Still, I bet he enjoyed the ovation he received at the end from all of us, a grateful group. Yet another new occurrence at the Heron house.