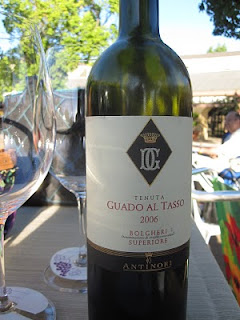 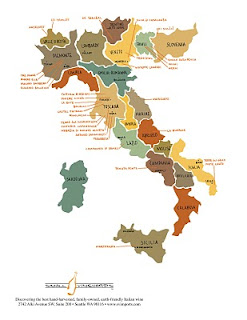 Among my wine tasting friends, my dislike of Italian wines has become legendary and solidified into a long-standing joke. If I say “it tastes Italian”, it is synonymous with, “the wine is no good”. Truth be told, I have opened up my horizons and discovered a number of different Italian wines I like, especially after several trips to Italy where I had no choice but drink their wines. As it so happens, traditional Italian wines do not show well in the company of French, and especially American ones in wine tastings. This is because they are made to be consumed with food. They tend to be thinner in fruit and higher in acidity than their counterparts. They usually lack oak, sweetness, buttery textures and other such New World conveniences that make wine easier on the Domestic palate.

But then there are the Super Tuscans. This is a phenomenon, initiated in the 1970’s by Italian winemakers in Tuscany, where their traditional grape, sangiovese, too thin to stand up to the likes of its French counterparts, was mixed with just those. So, over the years we ended up with wines from the region which featured combinations of sangiovese with cabarnet sauvignon, merlot or syrah. The grandaddy of these wines, Sassicaia, became so successful that it now carries the same respect as celebrity Bordeaux labels. The venerable Antinori family, making wines since the 1380’s were not too far behind this revolution and have produced various Super Tuscans over the years. Their landmark label is Tignatello, a cabarnet sauvignon, sangiovese, cabarnet franc mix, manufactured since the 1990’s.

All this has led me to a conclusion about Italian wines that for the past decade held true, but now seems to be in need of revision. After discovering Super Tuscans, I said, ” the only Italian wines I like are the ones that speak with a French accent.” By this I meant that complementing the usually thin sangiovese with the likes of merlot or cabarnet made them more agreeable to me.

The need to revise this philosophy became acutely apparentto me a few days ago when a friend brought a much respected and expensive Super Tuscan to a wine-group dinner. It was another product of the august Antinori line called Tenuta Guado Al Tasso, its 2006 vintage, and it sells for $ 95 per bottle. Located near the coastal Maremma region of Tuscany, within the Bolgheri appellation, this, as it turns out is a large vineyard located 150-200 feet above sea level, which produces sangiovese as well as those French varietals that give the new wines from this region that accent I so like.

Guess what? The wine was no good! It smelled like domestic merlot, it was high extraction, a bit sweet and generally indistinct on the palate, and featured a huge American Oak finish that made it taste like Spanish Rioja. There was nothing Italian about it. Yes, I am supposed to hate Italian wines, but at least I should be able to recognize them as such. This wine could have been from anywhere around the world, made in a style that I call “Coca-Cola or Pepsi-Cola”. It was a typical example of the homogenization of wine styles across the world which is threatening to eliminate regional idiosyncracies, and make all wine taste the same from all over. Its composition, according to the bottle label, was 65% cabarnet sauvignon, 30% merlot and 5% syrah. It did not even have a smidgeon of sangiovese that is the characteristic grape of the region. It may as well have been produced anywhere in California, for there are plenty of such styles we can sample from our neck of the woods which are equally indistinct, but usually not at such high retail prices.

All this led me to realize that Super Tuscan has its own extreme where the wines become blah. It is hard to hate such wines. One simply has no emotion towards them except, maybe disappointment. The experience has now somewhat diluted my famous hatred of Italian wines. It is good for any connosseur to have something they love to hate, for when this disappears their lives become less focused. It is hard to define what you love when you cannot clearly identify that which you hate. And while Italian wines that speak with a French accent are certainly acceptable to me, it appears that those which speak with a Spanish accent are not.

THE ALLURE OF “DUMB” WINES