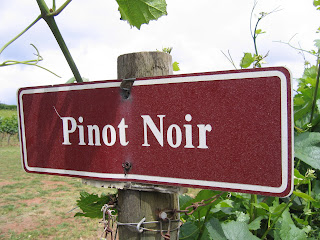 My recent preoccupation with Bordeaux vintages took me down memory lane into certain years that I recall as landmarks that I experienced in my own wine journey. Two in particular had to do with pinot noir.

The first occurred soon after I joined my Friday night wine tasting group in late 1995. In those days I was mostly a California chardonnay enthusiast and did not have a palate for much more. I discovered that my new wine group was very Burgundy oriented, and while they sampled a large variety of wines, pinot noir from this famed region, and the precious few domestic winemakers who successfully mimicked it  were a steady, recurring theme.

Soon thereafter the 1994 vintage of California and Oregon pinot noir erupted. Released in 1996 and 1997, this turned out to be a landmark year in which the finicky pinot noir broke out of a niche status, and displayed excellent quality across the board. I became an instant fan, sampling such labels as Acacia, Chalone, Laurier, and Ponzi with much gusto.

Unlike their Burgundian counterparts, 1994 domestic pinots displayed a lush, fruit forward style with hints of sweetness in follow-through. They were well balanced and seductive. The Burgundies we drank in those days – we could only afford “village” or “1er cru” wines – seemed austere by comparison. Only Chambolle-Musigny came close to this new, New World experience. We all ordered, collected, drank and shared 1994 domestic pinots en masse. Little did we know that this was the beginning of a long term trend. As Burgundy steadily went up in price and unpredictability, we gradually ditched it for domestic pinots, which while maintaining the new style, never quite startled us with another eye popping vintage again.

Exactly 10 years later domestic pinot noir got another boost from an unexpected source, and broke out into a yet larger population of wine drinkers. In 2004 the movie “Sideways”, an intelligently written comedy about the adventures of two male bonding guys with diverse personalities traveling through  the Santa Barbara wine country, made a movie star out of pinot noir. This movie, in effect served as an infomercial for the varietal. In its aftermath, the popularity and price of domestic pinot noir went through the roof.

While I enjoyed “Sideways” and agreed with is message about pinot noir, I was dismayed by some of its unintended consequences. They included insane price inflation, and -worse yet – the advent of poor quality wanna-be’s that proliferated in the market. Three of the labels I mentioned earlier (Acacia, Chalone, Laurier) were all kicked down into this category as they were acquired by large corporations. During the heyday of the 1994 vintage everything was equally enjoyable. Nowadays we have to sift through weeds to get to some flowers.

Next year we reach the twentieth anniversary of that landmark 1994 vintage. Can we look forward to another leap in the history of this grape? My prediction is, “unlikely”. However if there is one, it will more likely be down rather than up.

A UNIQUE DINNER WITH OLD BORDEAUX