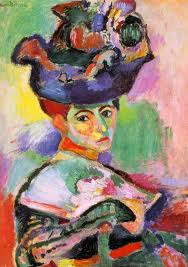 I recently attended a special exhibit in the San Francisco Museum of Modern Art entitled “The Stein Art Collection”. It was a massive assemblage of the artwork amassed by the author Gertrude Stein and her brother Leo, both of whom spent their major adult years living in Paris, and bought avidly. They particularly became known for a taste in the avante-garde, prolifically purchasing the likes of Cezanne, Renoir and Picasso, all still poorly established in the 1904-1913 period when their purchases were at their peak.

They became best known however for their keen eye on a new painter whose work was yet to be understood, and considered vulgar, Henri Matisse. The Steins’ purchase of “The Woman With a Hat” (picture to your left), now considered a masterpiece, scandalized the Paris Autumn Salon of 1905. At the same time it helped establish Matisse, since by then attention from the Steins had become a badge of honor, especially for avant-garde artists.

As I made my way through the massive exhibit, gallery after gallery, each introducing its contents with a few paragraphs inscripted onto a wall near its entrance, a statement caught my eye. It was in a gallery that followed the Steins’ saga immediately after World War I. The paragraph started with the statement, “by the end of World War I, the Steins were priced out of the Matisse market. From then on, they restricted their Matisse purchases to smaller, lesser known pieces.” By the time I came to this gallery, I had seen countless Matisses they had amassed, and read the story of their patronage of, and friendship with this painter. Matisse himself, it turns out, was dismayed by the turn of events, and tried to make up for it  for his original patrons to whom he owed so much.

The statement that these wealthy connoisseurs, so avid in their pursuit, were struck down by getting “priced out” touched me personally. I realized that this is a predicament any long term collector faces at some point in their lives. I had a special pang in my heart because at about the same time I visited the SF MOMA, I had been receiving Bordeaux prices from various wine outlets in countless e mails. It was clear that the prices of 2009 and 2010 Bordeaux, both hyped as very good years, have reached a new stratospheric level.

It was thus that the Steins’ predicament touched me. I realized that like them in 1919,  I am now “priced out”, in my case out of the Bordeaux market. As I moved into subsequent galleries I saw displays of yet countless more paintings the Steins bought, many from still unknown, or lesser known names. They did not stop collecting. They merely switched to more affordable alternatives still within their artistic taste. And so will I, I suppose.

The only consolation of this story is that the offerings in the wine world are more varied and accessible than that of high-art. For every wine one is priced out of, there is at least five or six in line waiting to replace it. In the meanwhile, I can further be consoled by the collection I have already amassed, 1995 to 2006, which will take me my remaining life to consume, and those of my friends with whom we will share both ways. I doubt that there will be any poverty of Bordeaux in our lives.