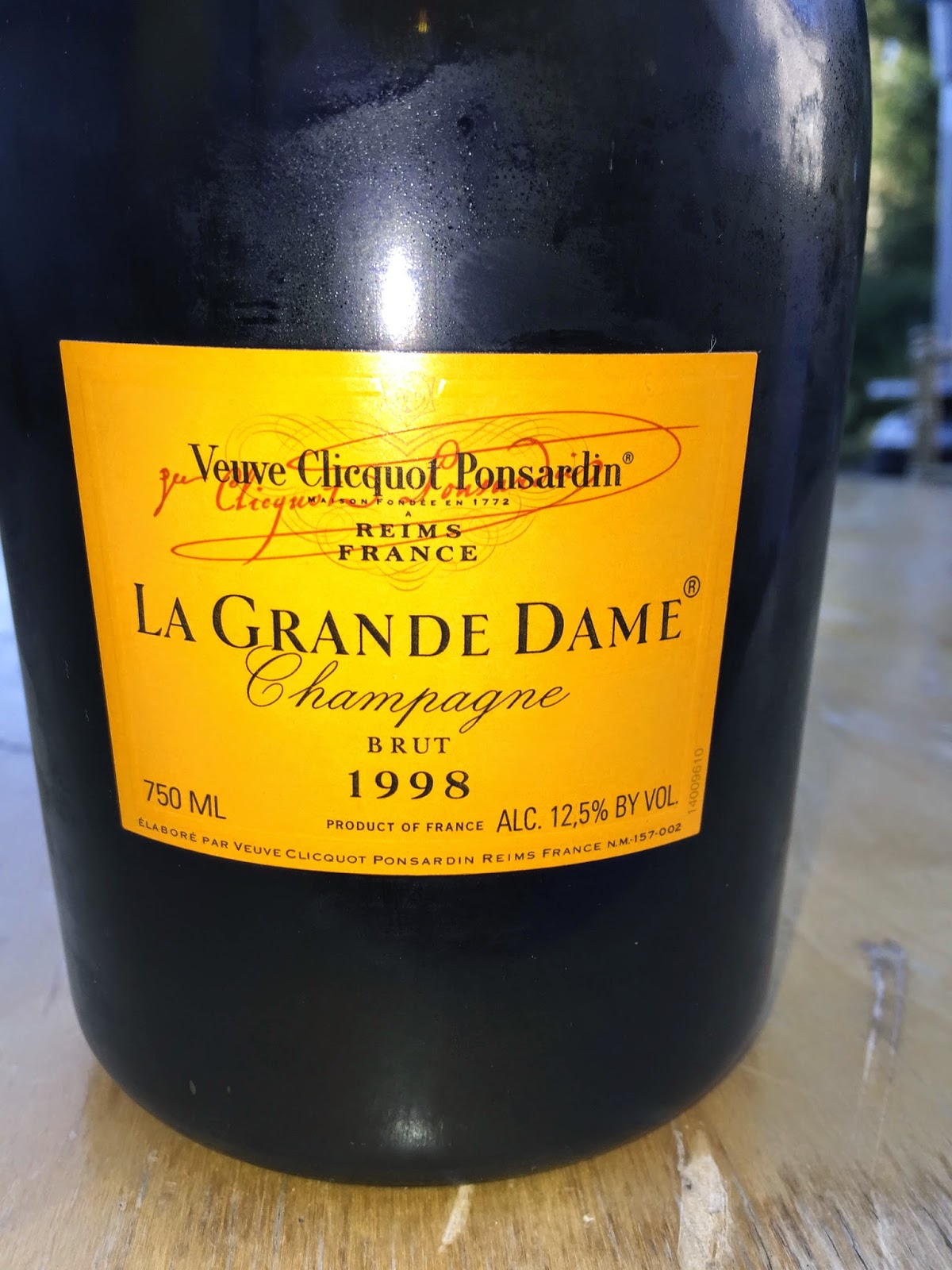 The Wall Street Journal used to have an annual Open That Bottle event. Invented by their then wine columnists Dorothy J Gaiter and John Brecher, a husband and wife couple, the event encouraged wine drinkers to uncork a special bottle that they were holding out on. Readers who participated submitted stories about their experience to the paper, many with interesting, poignant,  informative back-stories, and some were published. The columnists retired in late 2009 and so did the event.

I never partook in Open That Bottle, even though I had many special bottles that awaited an occasion. Maybe I didn’t because I had so many. In any case, I belatedly joined Open That Bottle with a 1998 Veuve Clicquot, La Grande Dame. Since I can’t submit my story to the WSJ, I’ll share it here.

The bottle was a gift to my wife Julie from her close friend Denise Djokic. It entered our garage refrigerator several years ago and has since kept company to many cases of white wine that have come and gone. Julie and I could not get ourselves to open it. We kept looking for an occasion sufficiently celebratory for such an auspicious wine, one that did not involve numerous participants; otherwise everyone would be getting only a small drop. Since the bottle was Julie’s I was hesitant to interject myself too aggressively into any decision to open it.  So it stayed there.

Champagne does not declare vintages every  year. They do so only in very good years, making such bottles special and more expensive. La Grande Dame is Veuve Clicquot’s highest label, a wine I have sampled only a few times. Unlike the heavier, yeastier style of some such as Krug, La Grande Dame is light and crisp, smooth as silk, my kind of champagne.

I expected the same from this 1998, but it was getting on in age. After all it is made of pinot noir and chardonnay (64% and 36% respectively, to be exact), both varietals that don’t hold out well beyond a decade. I worried about it. Julie and I discussed it many times. Should it be on a New Year’s Eve or maybe a wine-group party? At one point she gave me a resigned go ahead to open it and drink it myself. I couldn’t. Such bottles need to be shared.

The bottle stayed in an obscure corner of the fridge, by now forgotten, when this past week Denise and Julie took a day off work and treated themselves to the spa at Wine and Roses, a fancy B&B in  Lodi. It was a getaway in honor of Julie’s 60th birthday, just around the corner. That night Julie returned home with the news that unbeknownst to us, Denise and her husband Miro had arranged Friday night dinner with us at Towne House, the B&B’s restaurant. At first I objected, for that meant skipping my hallowed Friday night  wine group, but soon I came around. We don’t often see Denise and Miro and with Julie’s seminal birthday, the occasion was indeed special.

It was then that both Julie and I independently and simultaneously decided this was the time to open the ’98 Grande Dame. 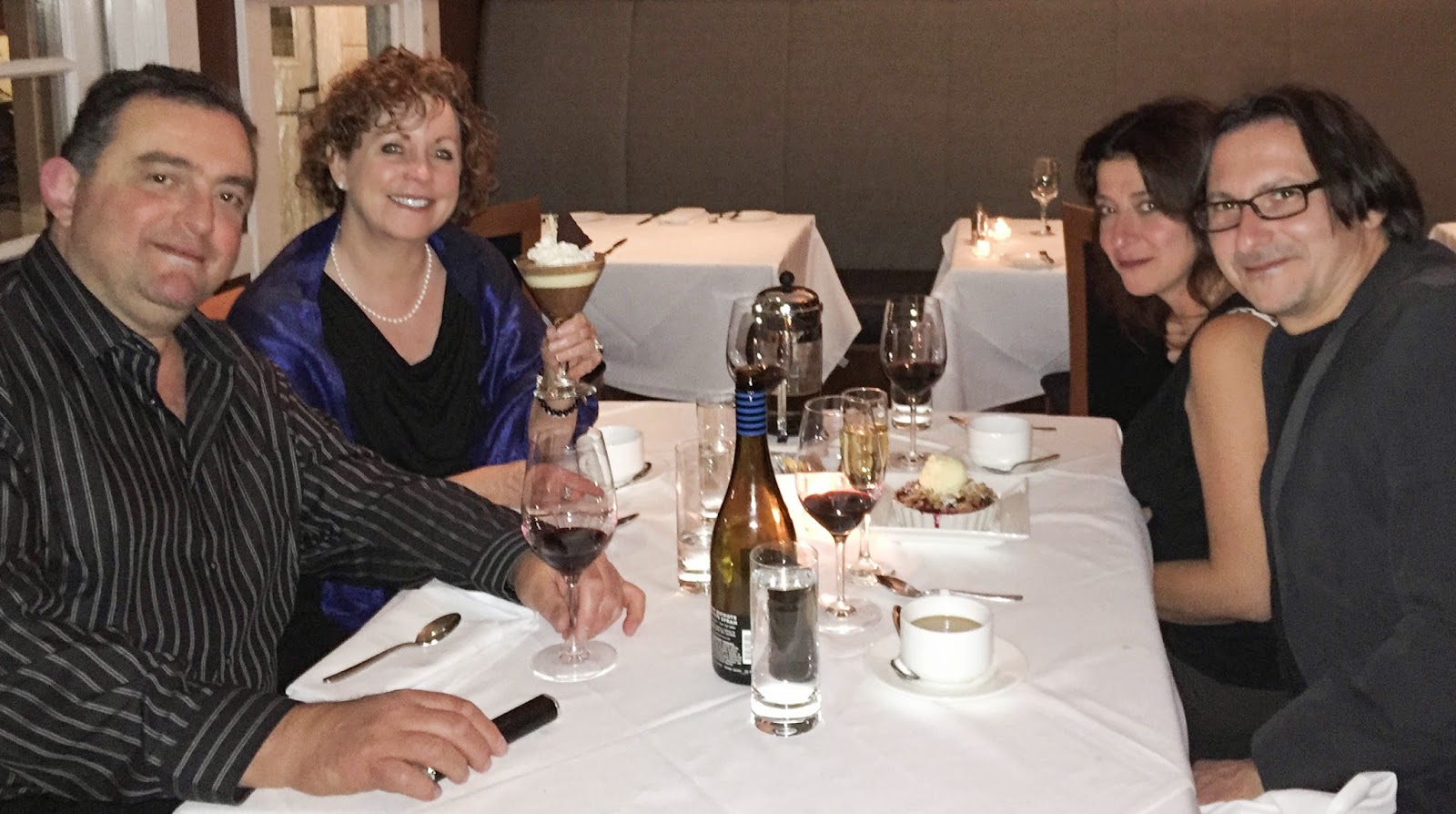 It had assumed a darker golden hue, its bubbles were no longer lively but it still featured crisp fruit upfront. In mid palate there was a distinct nutty character that is typical of older champagnes. It was still alive and drinkable. We downed it with hors d’ouvres and salads at Towne House in the company of our friends. Denise was surprised that her gift had not been consumed yet, but also pleased. We stayed a long time at that restaurant, the only diners left, engaged in lively conversation.

Seeing that champagne bottle empty gave us much satisfaction. We returned home and prepared for an even greater event, a dinner in our house to accompany another Open That Bottle event, this time that of our friend Steve Cottrell who brought over a number of high end Bordeaux wines from old vintages. More on that later.