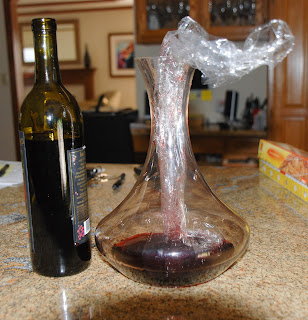 Have you ever experienced the heartbreak of corked wine? I have. Countless times. There is nothing worse than the anticipation of opening a much respected label, maybe one that has been stored for years, and the letdown afterwards when it is corked. Many don’t know what to do with this. If in a restaurant you can return the bottle and ask for another. If you recently purchased the bottle from a wine shop, you can do likewise. But in our wine world, by the time we discover that a long cellared wine is corked, we don’t even remember how much we paid for it, let alone where we bought it from. We simply dump the wine.

There are ways to remedy the situation, and one of them is a technique you would least expect: run the wine through Saranwrap into another vessel. For my European readers, I discovered that “Saran” is unique American brand unknown elsewhere. It’s basically transparent, plastic food wrap. What can Saranwrap have anything to do with wine? And does it really work?

Without going heavily into college chemistry, we nonetheless need to understand cork taint before approaching these questions. This is a chemical contaminant known as TCA (2,4,6, trichloroanisol). It is not poisonous; it merely destroys the smell and taste of the wine, rendering the nose with a characteristic “wet cardboard” smell which, once identified cannot be forgotten; it also destroys the fruit flavors and enhances the acid characters on the palate. Suffice it to say that corked wine will taste nothing like what you would expect from whatever it is you’re opening.

TCA is formed by a reaction between chlorophenols present in wine and certain moulds, usually in the presence of moisture. While cork is often implicated, it can occur in various items in a winery, sometimes contaminating an entire winery. BV vineyards for instance, was infamously contaminated for quite a few years in the late 1990’s. In that situation, getting an alternative bottle is of no use, since all will have some kind of cork taint.

Saranwrap is a polyethylene, and it binds the TCA molecules. It has to be crumpled, as in the picture above, to allow a higher surface area of contact with the wine. As the wine pours through it, the wrap acts as a TCA filter.

Does it really work? You can find many personal testimonials on the Internet that it indeed does. Let me add one of my own. I recently opened a 2008 Domaine D’Auphiliac, one of my favorite Languedoc wines, the new vintage. Wouldn’t you know it? Corked! We did the Saranwrap treatment and it amazingly cleaned the wine up. The wine was not heavily corked, and that may have contributed to the success of the process. But it does work.

With wine novices I have found that identifying defects such as cork taint is a bigger deal than treating them. They are uncommon, and many miss them. But if you don’t, and have any polyethylene wrap around (it does not have to be Saran), give this remedy a try.