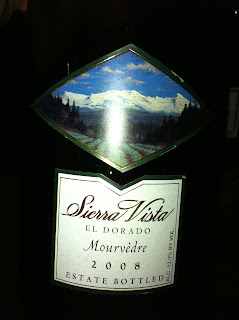 Finally, a California Mouvedre that resembles its French counterpart!

This one appeared in our regular Friday night blind tasting recently and it was an elegant wine with a cocoa/coffee nose, nice upfront fruit, well balanced and clean with good acidity in the finish. It revealed its domestic origin in a hint of sweetness in mid palate, and its high alcohol. However, we all guessed that this would turn out a Chateauneuf du Pape or Vacqueras. We were surprised to discover that it originated close to home, in El Dorado County.

Mouvedre is an old world grape initially planted in the Catalonia region of modern Spain by Phoenicians in ancient times. There the grape is nowadays known as Mataro (a moniker you will also find in some domestic labels, most notably wines from Ridge), or Monastrell. It made its way to Southern France in the 16th century where it has found an expression that we, in our wine group cherish more than most other varietals. It is a common ingredient in Southern Rhone red mixes, from regions mentioned above, where it is partnered with Grenache, Syrah, Cinsault, Picpoul and others. It is also presented as a pure varietal in the wines of Bandol, a Provence town on the Mediterranean coast, finding its most elegant expression in the bottlings from Domaine Tempier.

Over the years we have sampled numerous domestic mouvedre bottles, all disappointing. Most are flabby wines that are clumsily balanced, and taste nothing like the French version. Most lean towards excesses in extraction, alcohol, and of course oak, making them taste more like zinfandel. It was thus pleasantly surprising to find one from the Sierra Foothills where such excesses abundantly abide, which we could easily mistake for Southern Rhone.

The Sierra Vista winery, in business since 1972, is located in the El Dorado Foothills near Placerville, due East of Sacramento, and 30 miles west of Lake Tahoe. The grapes are farmed at around 2900 ft of elevation. They also buy more grapes from Tablas Creek, another “Rhone Ranger” producer from Paso Robles, inland near the Central Coast. Apparently the climate of the Sierra Foothills at that elevation closely resembles that of Northern Rhone. Climate similarities do not necessarily translate to  identical wines across different parts of the world. Soil and wine making play a major role as well. Obviously the makers of this 2008 Sierra Vista Mouvedre have taken great care to pay homage to the region that has inspired them, with success.

WHAT DO CHATEAU LATOUR AND FRUITCAKE HAVE IN COMMON?