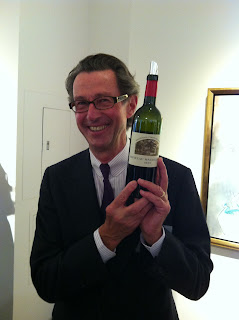 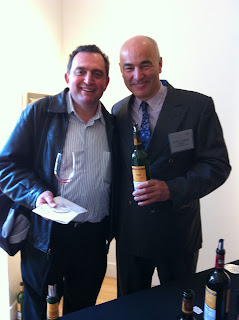 In a trade style tasting entitled “Tour des Deux Rives” (Tour of two rivers), which refers to the Garonne and Dordogne rivers which run through Bordeaux, the San Francisco wine shop K&L assembled an impressive array of wines along with winemakers. Held in a swank second story art gallery overlooking busy Union Square, the tasting featured 25 labels by 6 winemakers, and it ranged from very high end exclusive labels to entry level wines and everything in between.

I most enjoyed meeting the various French winemakers, including Bruno Eugene Borie of Ducru Beaucaillou (lower picture) and the famous Christian Moueix of Ch Petrus and Dominus fame (upper picture), whose empire, as I discovered included numerous labels from Pomerol and  St. Emillion. Moueix in particular was, as the French would say tres sempathique, very charming, outgoing,  personable in a uniquely European classy way.

As for the wines, I thought that this tasting was a shrewd marketing coup by K&L, who drew nearly 200 tasters to the event with a surprisingly cheap $60 per person fee, and four super-labels as enticement. In the process they unveiled numerous more affordable wines which their clients are likely to order. I can certainly be counted in.

The best bargain in Bordeaux in my opinion remains Chateau d’Armailhac, a 5th Growth from the Mouton empire, which ages well, delivers consistently good quality and remains affordable even in the insanely priced upcoming 2009 and 2010 vintages at around $55 to 60 per bottle. The two d’Armailhacs in the tasting 1996 and 2004 were both outstanding.

Another lesson I learned was my reaffirmation that the year 1995 is aging amazingly. In fact it doesn’t seem to be aging at all. These wines are still packed with massive fruit, as though they just left the winery. The 1995 Palmer, the only example of this vintage featured such fruit, solid tannins and had an almost jammy character. I think that this vintage will beat the more hyped 2000 and 2005 by a mile.

So what about the superstars? That ounce of liquid gold I imbibed from Ch. Mouton, as expected was too young at seven years. One could only imagine what this tight, also big fruit wine would be like when mature. By then I bet its price will quadruple. The Pichon Lalande, Palmer and Ducru were all outstanding. I wish I could drink these every night instead of just special occasions in measured sips. But then the mystique of high end Bordeaux would evaporate.