CREATIVITY IN FOOD & WINE VS ART 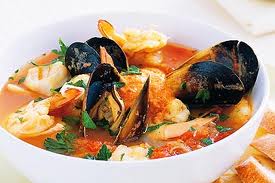 I recently had dinner at a swank French restaurant in the SOMA district of San Francisco called Chez Spencer. Among the appetizers bouillabaisse was listed; so I ordered it. To my surprise what they brought was a red broth with some fish flavor. I had never encountered bouillabaisse devoid of “stuff” in it, and I was taken aback. This classic French dish, analogous to the Italian cioppino probably started out as a basic fisherman’s dinner, where they threw in whatever seafood was available into a broth, and made a sort of seafood stew. It has now become elevated to high cuisine status. It is a soup with various types of shellfish and fish meat and usually some bread slices.

As I spooned my first few mouth fulls of the Chez Spencer version, a polite gentleman who identified himself as the restaurant manager came by and refilled my glass of Chablis. He asked how I liked the soup. So I told him that I had never encountered this soup as a bare broth. Remaining quite polite in his tone of voice, he then quite condescendingly explained to me that this is common in France, and he knew well, because he had worked in many restaurants there – implying that I was some ignorant dope who did not know the first thing about French cuisine. I took in his remarks in silence and moved on to the rest of the dinner which included fois gras and fillet mignon, both presented with no surprises.

Yesterday I recounted my experience to Larry Johansen  and Dave Cook of Wine Wizard’s, our local wine hangout. Larry who owns the place immediately said that yes, he has heard of bouillabaisse as a broth, but if it is presented so the customer should receive an advance warning in some way or other. Dave, who is a master French chef was more unforgiving. He considered the broth a major gaffe. He explained, quite emphatically, that in any cuisine, – especially French – a chef that presents a certain dish needs to adhere to classic criteria pertaining to the dish. Bouillabaisse should never be served without fish and shellfish swimming in it. He considered deviation from the prescribed formula a total affront.

My rather mundane experience with a bouillabaisse variant provoked thoughts well beyond the confines of culinary tradition. First I thought about art. Any art, be it painting, music, dance etc. has various genres within it. Practitioners of the art feel pressure to adhere to the norms of genre, and audiences certainly expect it. Take a symphony for example. Audiences expect a stylized dance in the third movement, a minuet & trio or a scherzo. Ballet audiences expect what I call “tutu dances” a la Ballanchine. Museum goers expect paintings that resemble real life. When a Mahler comes along and gives a jolting “Frere Jaque” melody presented as a dirge alternating with klezmer music (Symphony #1) as a third movement, audiences are outraged, as were the Viennese who first heard this masterpiece. Audiences still scratch their heads in attempting to understand “modern” dance, or Cubism.

Interestingly, history assigns great value to those who break the rules and change a genre. There are countless works in different art endeavors which can be cited as examples. Mahler’s Symphony #1 is certainly one of them. So are Picasso’s “Les Demoiselles d’Avignon” or “Guernica”. And so is Martha Graham and her dances. I personally appreciate such avant gard works, and recognize them as masterpieces.
When it comes to wine however, my attitude is like that of my friend Dave Cook regarding French recipes. A given wine has to deliver what you expect of it both in varietal qualities, terroir and age. A pinot noir that tastes like syrah is no good (even though many pinot consumers love such wines). Nor is a two year old white Rhone wine (marsanne-roussanne grapes) which already looks and tastes like it is 15 years old (I have had the misfortune of tasting many such wines). A Loire Cabarnet Franc which tastes like Beaujolais (something we tasted last night in wine group), is again, unacceptable.

Considering the amount of “creative” manipulation winemakers are unleashing on their consumers, wines that deviate from the norm are very common. I happen to think that such wines should come with appropriate descriptions in their labels to disclose their nature to the clients, as my bouillabaisse should have been. The problem with that soup was not the attempt of the chef to be creative. It was his failure to explain this to me in the menu.

In music such an explanation is called a “program”, and the first composer who explained a now classic, and in its time very original symphony with a “program” was Hector Berlioz with his Symphony Fantastique. Subsequently programs first  becamecommonplace, and then problematic. Many composers eventually preferred not to concretely explain their works to their audiences but rather let different eras derive different interpretations of their art. This also is true in visual arts, literature and dance.

The chef who made my bare-broth bouillabaisse was hardly a Gustave Mahler. The dish is unlikely to become a classic. As for me, while I will visit this restaurant again, I will not order this appetizer again. My lesson from the experience is that I have a double standard when it comes to visual or aural art (music, painting, sculpture) where I can appreciate innovation, and avant-gard creativity, versus oral experiences in food and wine, where I don’t.