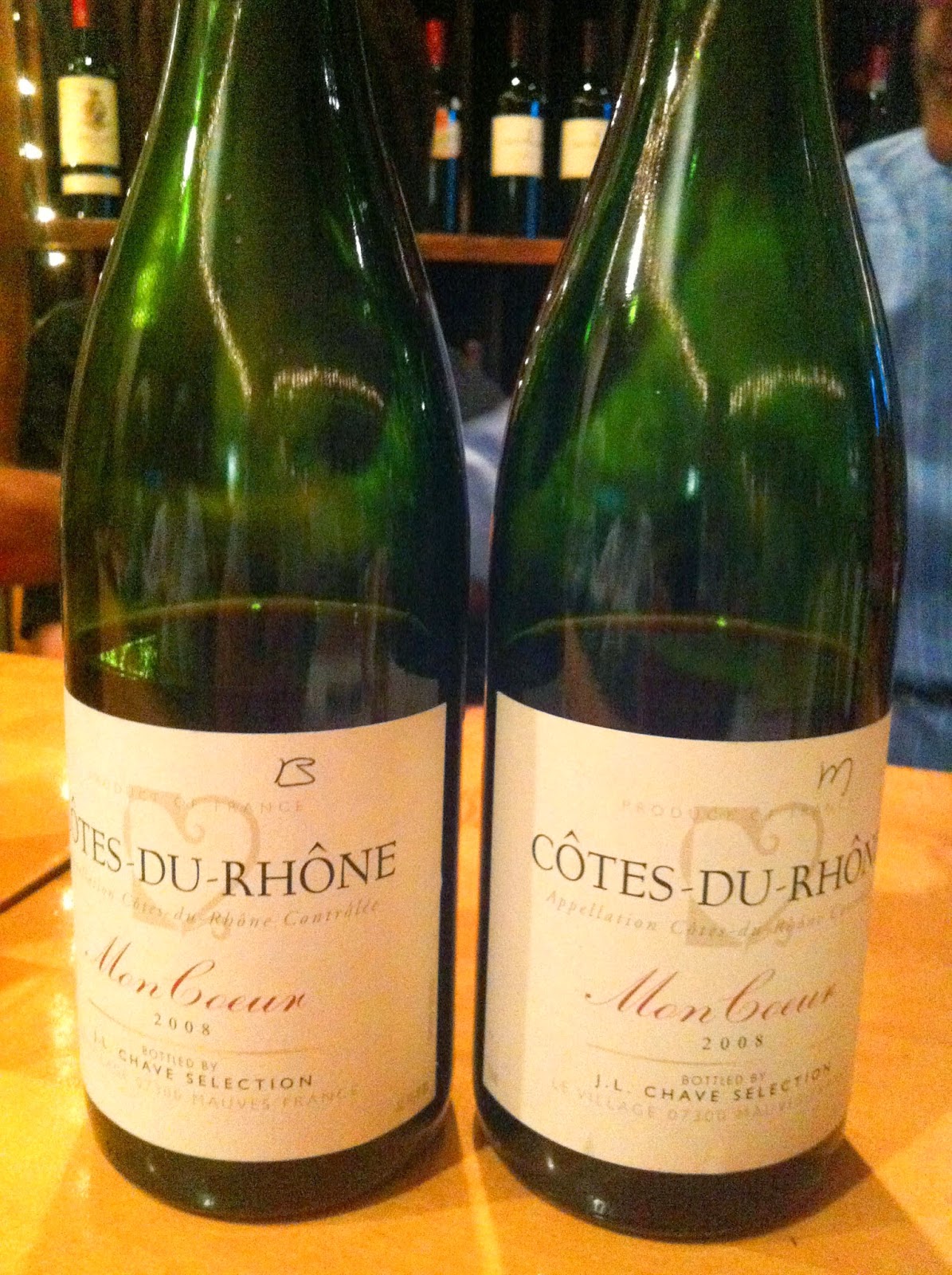 Our Friday night wine tasting group, free-style as it is, with anyone who wants to participate bringing any wine they wish, is sometimes conducive to wild, unbelievable coincidences. We had one recently.

The format is a blind tasting, loosely ordered, with whites first, then light reds, to heavy reds, the participants attempting to guess the identity of each wine tasted. Since no-one knows what others brought, the sequence of the wines tasted is somewhat random.

On this occasion, a red we sampled seemed clearly from the Southern Rhone, with hints of smoke and tobacco on the nose, a crisp, fruity entry, mild tannins and pleasant, still smoky finish. We all agreed to its appellation. I guessed it as a  Cotes du Rhone, Mon Coeur made by Jean Louis Chaves. A 2008. That was indeed what it turned out to be (my guess, an unusual home-run).

Next came another red, brought by another member of our group. This one was also clearly Southern Rhone, but very different than the preceding one. It was less crisp, softer, with more green-olive, mouvedre flavors and a longer finish. Some of us, including me,  thought it was more elegant, maybe a Chateauneuf du Pape, while others detected ample brett in the fundamental expression of this wine.

Imagine our surprise when we opened this second bottle and it turned out to be the exact same wine as its precedent, a 2008 Cotes du Rhone, Mon Coeur, from Chave. The two group members who contributed had not colluded with each other and were equally surprised by the remarakble coincidence.

I tasted these two again an hour or so later and the difference between them was even more  pronounced, one crisp and fruity, the other more smooth and bretty.

How could such a difference happen between identical bottles of wine? How does brett get into one and not other? One wonders whether the wines came  from different barrels, one contaminated, the other clean. Or was it storage, after purchase? Warmer storage encourages brett features in the long run. But 2008 is not that old a vintage, making storage difference less an issue.

There is another, more universal explanation for such mysteries: “bottle variation.”

This is a term  we take for granted, a phenomenon we accept as a matter of faith. What exactly does it mean? My understanding of it is that the same wine, when distributed to countless different bottles, will, on occasion, mature and present differently, i.e.  what we just experienced. But why?

There are various technical and aesthetic explanations for the phenomenon depending on who you ask, none of which can be proven at the time of tasting. So we speculate, shake our heads, and move on to the next bottle, delighted that  such mysteries of nature exist, adding colorful wild-cards to our wine experience.

A SIMPLE AND SATISFACTORY WINE

CHOPPED, BUT WITH A GRAIN OF SALT