CORSICA AND PATRIMONIO; A REGION WORTH A TRY 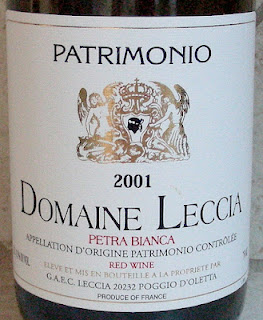 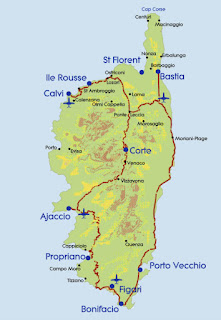 In a recent Friday night tasting of randomly brought blinded bottles, a 1998 version of the above displayed label stood out. It was a high extraction dark wine, with hints of coffee and dark berries on the nose, and a smoky, beefy flavor on the palate that I loved. We all guessed it as a Southern Rhone wine, most likely Chateauneuf du Pape, most likely a 2005 or 2006. We were surprised when it was unveiled and it  turned out considerably older than we thought.  It was actually the flagship wine of a well known winemaker from Northern Corsica, located in the village of Patrimonio, Domaine Leccia.  We should not have been surprised by its place of origin.

We don’t think of Corsica much in the differential diagnosis of our blind wines but we should, for they appear regularly in our tastings. This is because Kermit Lynch, the famed Berkeley wine importer in whose orbit we reside, regularly sells wines of this island, and we like them. Therefore they have infiltrated various cellars of our wine sharing friends.

Most famous as the birth-place of Napoleon Bonaparte, Corsica is a Mediterranean island which belongs to France. It is close to the Provence coast of the country, and as such it shares a somewhat similar climate and soil as Southern Rhone and Languedoc wines. But it is also close to Italy, and there is a decidedly Italian touch to the Corsican wine experience. For me Corsica is a hybrid between France and Italy, with bold, bacony, tobacco, smoky noses and flavors, but a somewhat lighter extraction than Southern France and an Italian acidic finish.

Patrimonio, the village in which the Leccia wine was made is a centuries old historic winemaking region, and the Leccia family have been engaged in this craft for generations. Located in northern Corsica at the base of Cap Corse which juts north of the island like a finger, Patrimonio is a hilly territory adjacent to the gulf of St. Florent, where its proximity to the sea protects it from the excesses of winter and summer. The red grapes of the appellation include Nellucio, Grenache, Sciacarello and Vermentino. The area is also known for its white wines made of 100% Vermentino, a grape which has different expressions in Spain, Corsica, and Italy, all worth a try in my opinion.

Yves Leccia, the current winemaker of the label, also makes a wine called E Prove, which we have drank and loved in both its white and red versions. According to Kermit Lynch, Leccia wines are considered the “Rolls Royce” of   Corsican wines by the French. Judging from our experience last night, when instead of a hybrid experience, the Petra Bianca gave us a luxury C. du Pape delivery, France is right on with their opinion. For those looking for a different experience from the usual “stuff” consumed, I suggest you look up Les Vins du Corse.