THE JOYS OF OFF YEAR BORDEAUX 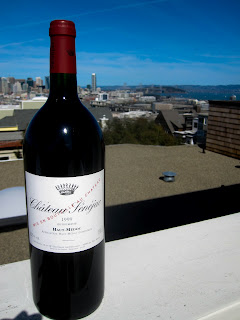 Browsing through the shelves of K&L, a wine shop in San Francisco, I noticed that the 2009 vintage of Bordeaux was already there. I stumbled upon a shelf of large format ’09’s with eye popping prices. The vintage is a much ballyhooed one, and the prices reflected the hype. A Pichon Lallande magnum was over $400, Ch d’Armaillac near $200, and so on. Nestled among these I came across the bottle you see in the picture and was surprised. It was a 1999, an unknown Cru Bourgeois label. It was also a magnum and the asking price was a mere $39.99.

This is the kind of sharp difference in price point which repels those who don’t know the appellation. But I have discovered, by experience, that the 1999 vintage, while considered an off year in Bordeaux, has been drinking very well for the last 2 years. My friend Padmesh a big Bordeaux enthusiast has also come to the same conclusion. Intrigued, I took  the bottle to the counter and asked the clerk why the price was so cheap. He replied that it was because the bottle came directly from the winery with no middlemen involved. I decided to buy it along with a second one in the same shelf.

Wow! He just rattled off my own favorites. In the two nights preceding my visit to K&L I had opened  2004 Ch. d’Armaillac and 2004 Canon le Gafelliere, both drinking wonderfully well, the d’Armaillac very smooth and silky, and the Canon packed with more fruit. The Right Bank where the Canon comes from had a better year in this derided vintage. As for 1997, I discovered how good it was as early as 2000 when we visited Bordeaux, and all they were serving were ’97’s. I had a chance to buy many uppity labels from ’97, including First Growths at fire sale prices when the vintage bombed in the shelves because of bad publicity. They are all drinking wonderfully now. Last Friday a ’97 Calon Segur trumped an 85 Cos d’Estournel and an 89 Right Bank  in our blind tasting, much to our surprise. It was a charming wine.

The Ch. Senejac also turned out to be quite charming. It was certainly not grand, and not very complex. Its fruit was beginning to drop out a bit. But it was reasonably well balanced, low in alcohol compared to domestic cabarnet’s, and an easy drinker. We knocked off the magnum with another couple in no time.

I just tasted the new 2008 Bordeaux, which is also considered and off year, and will  soon be very cheap, because it will be sitting on the shelves in surplus, overshadowed by the highly touted 2009 and 2010’s. If you can watch out for sales and put away some for a few years, you too can discover the joys of off year Bordeaux, for I am sure 2008 will become much like the others I mentioned above.

IDENTICAL BUT DIFFERENT TWINS, A THEORY OF RELATIVITY