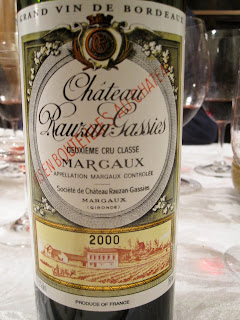 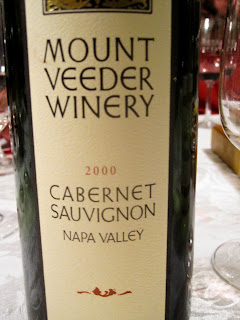 In a recent tasting at George Heron’s we pitted California Cabarnet against Bordeaux in the all important 2000 vintage. This was a good year in both regions. Napa of course never has any bad years, right? Bordeaux however still goes through the ups and downs of weather and other conditions which affect its products. Since the storied vintage of 1982, the good years in Bordeaux have come to be more and more hysterically hyped. 2000 turned out to be such a year, and because it was the millennium, about which we were crazier in those days than we are now, the vintage commanded exceptionally high prices for its time. We all figured it is time to begin exploring this vintage now that the wine has been lying down for some 12 years.

The tasting was better attended than usual with 10 enthusiasts there. The group included three Bordeaux fans (myself, Padmesh & Jim Stephen), three California fans, George Heron and his wife who straddle both lines, and two undecideds. There were seven bottles assembled, 3 Bordeaux and 4 California. We tasted them  blind all in a row, and then discussed each before unveiling the bottles.

All the bottles turned out good except the Lajota which had something chemically wrong with it, with a gasoline nose,  cough medicine taste, and poor balance between acid, tannin and alcohol. We all hoped that our palates were not permanently poisoned by this one, and thankfully the after-effect of the wine was temporary.

The one general conclusion that emerged from this tasting for me was that the California wines were fruit forward, inclined towards  hints of sweetness in the mid palate, and more importantly, maintained fresh, young fruit flavors as though they were not yet of age. The Bordeaux on the other hand had already matured. These were subtle, soft wines, with silky textures and dried fruit flavors typical of older Bordeaux. Considering the hype 2000 received this was a bit of a surprise. Some older “grand” vintages such as 1995 or 1996 still feature young wines full of piss and vinegar (so to speak), wines that have not matured or opened up yet. 2000, on the other hand seemed ready to drink now.

A more interesting observation from this tasting was not as much about the wines but the tasters themselves. Those with palates calibrated towards California uniformly disliked the three Bordeaux’s, because these simply did not deliver enough umph that domestic tasters have come to expect form their wines. The Bordeaux enthusiasts however loved their Bordeaux, and were able to guess not only which bottles  they were concealed in, but actually accurately name the labels before the unveiling as well. Of the California wines the one that had mellowed enough to most  resemble Bordeaux was the Mount Veeder, but even this one gave away its domestic origin with the clear hint of sweetness in its mid-palate.

There you have it. For Bordeaux fans, I suggest that 2000 may not be as grand a year as they made it out, and you can begin opening your bottles from this year. I certainly will, and I have quite a few. As for California fans, I don’t know what to tell you. Most of you buy and drink and don’t bother to cellar your wines over so many years anyway. I’ll be thankful if you actually read this blog all the way.