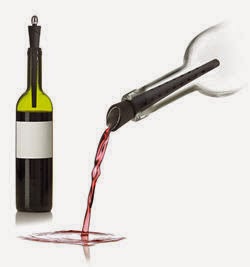 I like my white wine chilly. It is crispier, fruitier that way, less thick, less buttery. At home this is no problem. At restaurants it has unpredictable consequences. This past weekend we experienced a brand new one.

When I pop the request for chill, most waiters or sommeliers place the wine bottle in some kind of cooling device, a tableside bucket of ice water, a tabletop cylindrical cooler or some variant thereof. Some however,  take the bottle elsewhere, to a central “chilling station”. When this happens, watch out!

Some high end restaurants keep all bottles in central serving stations, chilled or unchilled. These are usually ones with impeccable service,  someone is constantly watching the tables, ready to refill on time with a new pour. In San Francisco Quince and Acquarello do an excellent job this way. The best I have experienced was in France, at L’Oustau de Beaumaniere, a Michelin rated restaurant in Les Beaux de Provence where in addition to a most attentive service, we received unbelievably perfect pacing of the pours, the bottle we ordered lasting us through the whole meal.

At many lesser restaurants however, the bottle disappears and so does the waiter. After an awkward period, facing an empty glass, the customer is reduced to furtive glances at any staff who walks by, busboy, another waiter, anyone, begging for another pour.

The first time I experienced this was a Gitanes, a small San Francisco bistro near Union Square. After some frustration, I had to demand my bottle back at the table. The wait staff complied, seemingly unaware that there was a problem. I have since had variations of this where I fetched the bottle myself, guilted the wait staff to more attention, or simply given up on chilled white wine.

Our newest experience was at  Nico, a small boutique place near Pacific Heights, with custom, daily changing, gourmet menus featuring three or five course pris fixe meals – currently the rage in our area. I ordered an unusual Italian white, Roccolo Grassi La Broia Soave from Veneto. It came at room temperature. I asked that it be chilled. It was taken to a nearby station separated from our table by a mere partition. The re-pours were herky-jerky but not too bad. I then noticed that a table of four next to us were being served the same wine. Interesting coincidence, I thought.

Soon our waiter approached us with a sheepish look and said, “uh, we’ve had a mishap with your wine….”

“You poured ours to the other table?”

They comped us on the price of the bottle and we ordered another one, a Central Coast Pinot Noir that needed no chilling and stayed at our table.

The experience left me more leery about wine bottles away from us. While it was the first such mishap it probably won’t be the last.

The next night we were at another restaurant Plin, in the Mission where, once again, they took away another Italian white, a Falanghina I wanted chilled. We told the waiter what happened the night before. Taken aback, he promised this would not happen at his restaurant. It didn’t.

Nevertheless we are likely to warn future waiters each time. Once burned, we’re not likely to re-live the awkwardness of it all again. I suspect neither do they.