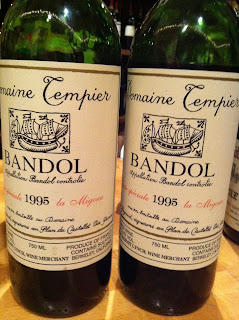 Domaine Tempier Bandol, one of the truly fine grand cru of the Provence, is usually a favorite among my wine drinking friends. Located on France’s Mediterranean coast, between Toulon and Marseilles, the town of Bandol features what might be called a natural amphitheater of vineyards that slope towards the sea. Here the varietal of mouvedere, also grown in nearby Spain and nowadays in California,  finds its finest expression in the world. The estate which has been in existence since the 1830’s and won medals in the 1850’s for their wine, was elevated to an exalted status beginning in the 1940’s by Lucien Peyraud who married into the Tempier family, and as winemaker, recaptured the former glory of the mouvedre grape in his wines.

Discovered by the Berkeley wine merchant Kermit Lynch in 1976, Domaine Tempier wines became increasingly popular among his ever enlarging followers, ourselves included. Made mostly of mouvedre, but also combining classic Southern France mixes of grenache, cinsault, carignan and syrah, the wines have an uncanny resemblance to those of Bordeaux, except that they are riper and more muscular. In the old days when they were cheaper we used to view them as “poor man’s Bordeaux”. Not any more. They have been discovered and the prices are way up there.

Members of my Friday night wine tasting group all have extensive collections of Domaine Tempier wines from numerous old vintages. The domaine features a Cuvee Classique, their regular bottling which is 70-75% mouvedre and a combination of the others. It also has three special vineyard designations, La Migua, La Tourtine and Cabassau, all of which are finer and more expensive. The latter is 95% mouvedre, the former two still feature mixes dominated by the “mother grape”.

Having finely tuned our noses and palates into Domaine Tempier’s wines over the years, we are quite adept at recognizing them in blind tastings and appreciating their nuances. Imagine our surprise then, when not one but two identical special vineyard wines turned out to be duds last Friday night!

They were both 1995 La Migua’s. The first, brought by Larry Johansen was oxidized and undrinkable; one smell and straight into the dump bucket. The other, Mel Stagnaro’s was drinkable alright, but unrecognizable as even a Bandol, let alone Domaine Tempier. It had a musty nose, simple and unbalanced structure  with overstated acidity that led some to guess it as a Chianti. The La Migua, usually more representative of the south with 50% mouvedre and a mix of the remaining “usual suspects” generally is a quite pleasing drink.

So what gives? To begin  with 1995, a pretty good year in other nearby appellations like Bordeaux and Rhone did not age all that well in its Tempier expression. We’ve had quite a few unsatisfying 1995’s although they are mostly drinkable. Secondly and more importantly, fine wines are like star sports figures. They have slumps and off periods, and they do not perform consistently supreme. This is a fact of the wine world that is hard for us to grasp. We are attached to name based reputation regardless of variations, whether they be vintage related or flukes like contaminants, and we find them more disappointing than say, Tiger Woods going through a non-winning season.

So yes, lightning can strike twice as it did with those two identical La Migua’s  and we can accept this as a fact of wine-life, and move on. Will it change our impression of Domaine Tempier? Absolutely not! They have had far too many winners for us to fret over a few losers.