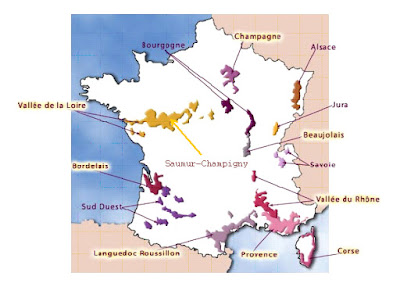 It cannot be a coincidence. Two San Francisco bistros two weeks apart, two wines from the little known appellation of Samur-Champigny, both outstanding, both bargains. 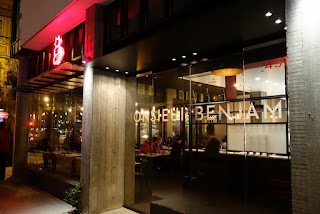 At Monsieur Benjamin, the hip Hayes Valley spot recently opened by chef Corey Lee, of Benu fame, where the wine list is mostly in three digit prices, I hesitated before ordering the cheapest red on the list. I was dining with Larry and Mariko Johansen, owners of Wine Wizard’s in Stockton. I did not know much about Saumur, except that it is in the Loire Valley. Neither did Larry. We figured it must be a Cabernet Franc. 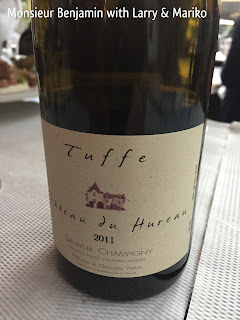 With an approving nod from Larry I took the dive, a 2011 Tuffe from Chateau du Hureau. It turned out to be quite elegant, with a classic burned pepper nose that I love in Loire Cabernet Francs, well restrained in extraction and alcohol, easygoing and yet adaptable to the various dishes around the table, flounder, duck, quail. Larry liked it so much that he took the name down to order some for his store. 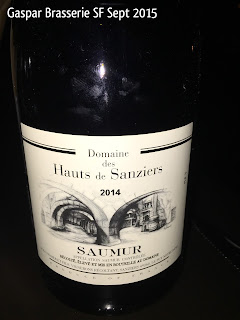 Yesterday, at Gaspar Brasserie, this time with Julie, a deja vu! The 2014 Hauts de Sanziers was of the same ilk as the 2011 Tuffe, and accompanied smoked salmon crepes, bavette steak and more flounder quite well. 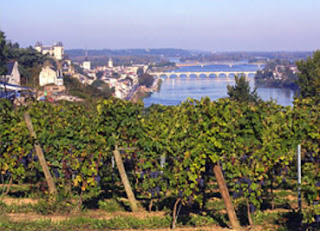 Located twenty miles downriver from its more famous brethren Chinon and Bourgeuil, Saumur is a town better known for a tragic battle that happened there in World War I and as the birthplace of Coco Chanel. It also happens to have vast vineyards in its vicinity, around 10,000 acres that produce two million cases of wine per year. The reds are Cabernet Franc, the whites Chenin Blanc.

A designated appellation since 1936, the soft limestone of Saumur, known to the French as tuffeau, has a chalky subsoil that nourishes Cabernet Franc into a unique cool climate expression that, in my opinion is, along with that of Chinon and Bourgeuil, the best, most food friendly expression of this grape.

Hauts de Sanzieres is a brother and sister wine-making effort, employing sustainable farming techniques common in the region. They only make one white and one red. Chateau de Hureau is a vast, impressive castle, of the kind that is ubiquitous in the Loire, with a cave complex worthy of a  James Bond movie cameo, underground caves prevalent in Saumur. They offer four different styles of Cabernet Franc and two Chenin Blancs, the Tuffe their flagship red.

A two decade excursion through wine lists has left me weary with new grapes and appellations that were once bargains but are now nearly unapproachable. None were new, of course, just newly discovered. Foremost among the grapes was pinot noir, among the appellations, Carneros and Russian River (in pinot noir), Gigondas and  Vacqueras (southern Rhone syrah-grenache blends), and Northern Italian and Spanish whites. All throughout however, most Loire wines – except for Sancerre – have remained bargains.

The two Saumur-Champigny reds were each around $40 per bottle. That folks, believe it or not, is a good deal nowadays in San Francisco restaurants. Prices aside, the wines were charming and approachable, inviting further exploration. I am certainly enticed. I suspect many of you don’t know much about the Loire.

New discoveries are the best pleasures of the wine journey. Step over and try some. Who knows, maybe you’ll be as smitten as Larry and I were.