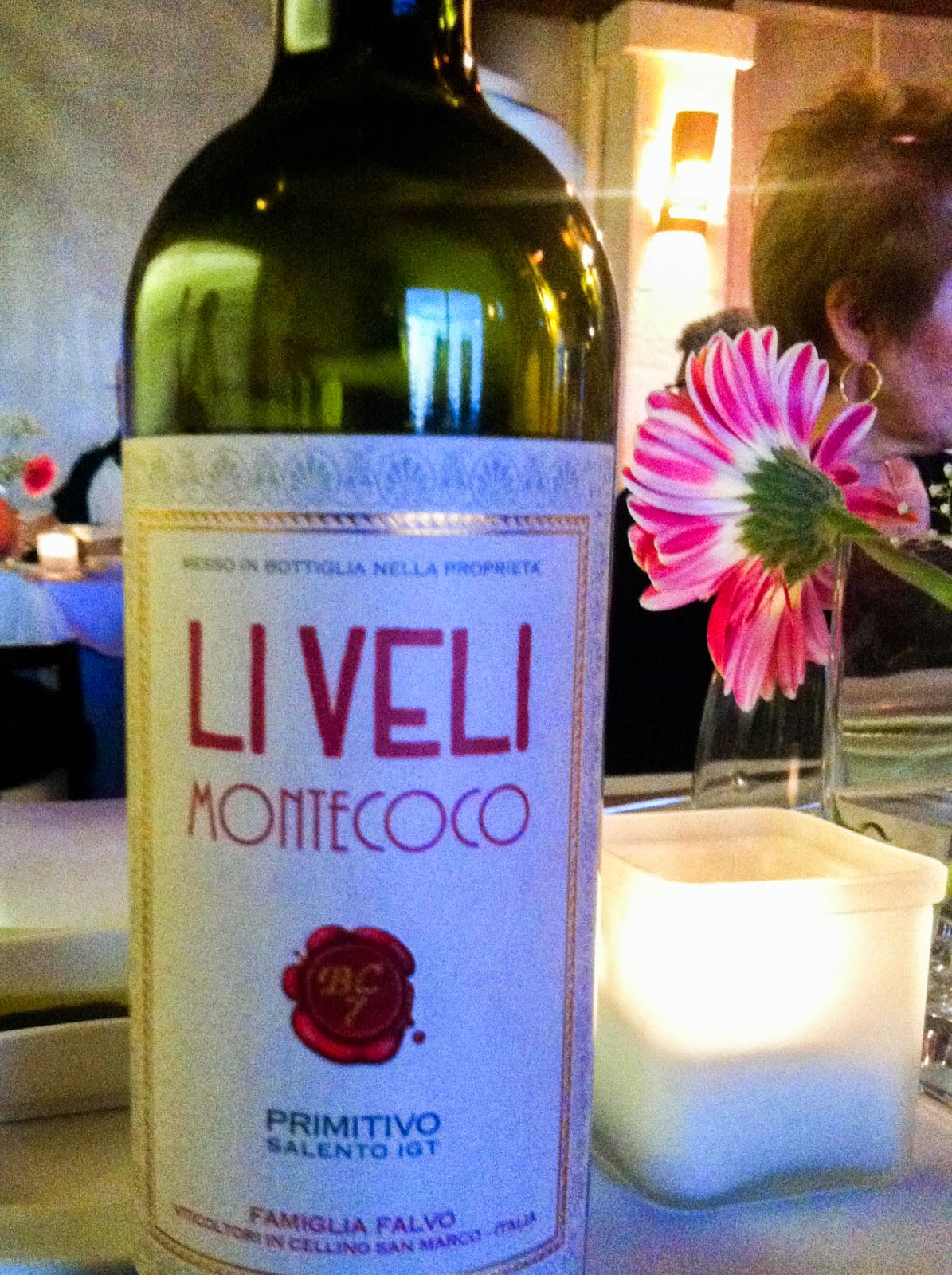 At the luxurious Masseria Torre Maizza, a few kilometers inland from the scenic fishing village of Savelletri on the shores of the Adriatic, our knowledgeable master of ceremonies Paolo, a matire’d for breakfast and lunch and sommelier for dinner, recommended the above wine to accompany seafood salad, Apulian aubergines and Adriatic fish fillet in foil. It did. Quite well.

It was a Primitivo, a grape mainly cultivated in Puglia, and one we mostly encountered during our visit there in blends with other local grapes, such as Negroamaro, Aglianico and French varietals such as Merlot (keeping lock-step with other regions in Italy Puglia is “modernizing” with foreign grapes). I have always known Primitivo to be a European version of Zinfandel, a varietal commonly considered the only indigenous grape of the United States, California in particular.

Did this taste like an American Zinfandel? Not at all.

Is Zinfandel really indigenous to America? Not quite.

Masseria Li Veli, located in the coastal plains of the Salento Peninsula (the heel of Italy) half way between Lecce and Brindisi features a line-up of various whites, roses and reds all from local grapes and, Italian as they are, a Grappa. Their Primitivo was as fruit-forward as Italy can be, but much lower in extraction than American Zinfandel, did not have sweet features but rather ample acid from mid-palate onwards that made it a good accompaniment to all we ate. The alcohol was restrained and there was no over-oak in the finish. In short, it tasted nothing like the Zinfandels we know.

Modern enological research has confirmed that Zinfandel and Primitivo have the same genetic origin and thus can be considered close cousins. They both harken back to an ancient grape called Crljenak (don’t try to pronounce this, you might get a tongue-spasm), so named in Croatia where this grape, that dates to pre-historic times, found its home in antiquity.

Biking the Adriatic shores of Puglia and observing the coast of old Yugoslavia in the horizon,  it was easy to imagine how this grape could come across to Italian soil in the 18th century. It acquired its moniker in the 1870’s, so named because it ripens earlier than other grapes.

As with many Europeans seeking new lives, the grape also came to America, imported by a Bostonian horticulturist in the 1820’s and being called Zinfandel as early as the 1830’s. It found its true home in California in the 1870’s and flourished there, only to wither, along with the rest of American viticulture, after Prohibition. The slow recovery that followed was accompanied with a collective amnesia that resulted in the common misconception that Zinfandel was indigenous to America.

As a Turkish transplant to the U.S. who has first cousins in England, Israel, Turkey and Brazil, I can easily appreciate the cultivational differences these different soils engender. So it is with Primitivo and Zinfandel. Primitivo belongs to Puglia and is, in its pure version -unadulterated with other varietals – uniquely Italian, as Zinfandel is American.

As if all this is not confusing enough, some American wineries are producing Primitivo-Zinfandel blends. Hop Kiln in Russian River is one of them.  What’s that all about?

It turns out that American labeling laws are strict enough to separate the two cousins by their native soil. In an unusual twist, despite generally more rigid appellation rules in Europe, Italians aren’t. They accept the two as cousins, the same family, as I imagine they also do all their fellow citizens who emigrated to the New World over the years.

I did not think about all these considerations as I downed the Li Veli Montecocco along with another bottle Paolo recommended that night. It was our last night at Torre Maizza and were to move south towards Otranto the next day. I handed Paolo the wine list and asked him to mark his favorites, with future blogs in mind when I returned home. He did and the list remained intact in my luggage.

The next morning Paolo was there for breakfast carefully supervising Torre Maizza’s diverse selection and impeccable service, and warmly bidding us arrivederchi. I shook his hand longer than others and told him how much I appreciated his expertise. He concluded our brief friendship with one last plea that I am now recognizing as an increasingly common refrain in Europe.

“If you really liked it, make sure you put in a good word for us with Trip Advisor,” he said.

I will, after I finish this blog.

IS SANCERRE THE SALMON OF WINES?