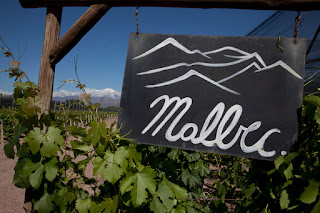 In our monthly tasting group at George and Gail Heron’s house (owners of Stockton’s Fine Wines) we assembled for a sampling of Argentinian Malbecs, a wine we don’t know much about. What an assault on the senses!

These were all big wines, inky dark, high extraction, with ripe fruit, robust tannins, and spicy, high alcohol endings. Thankfully none were overoaked. I usually spit everything in such tastings but even with mouth exposure alone I thought I could get inebriated. 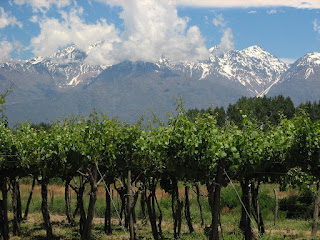 Some time during the tasting Gail pointed out that the Malbec clone brought to Argentina was a softer version of the grape that once thrived in France. Bold as they were, these wines did indeed feature softness in their upfront fruit, especially in the 2009 Zolo, Gaucho Select, 2012 Carmelo Petti, and 2009 1919 Lopez Noceti. Gail thought we should have included a French Malbec or two for contrast. A good idea, but too late.

I didn’t know then, that a suitable contrast was on its way, purely by happenstance.Within three days we would be sampling other Malbecs in our weekly Friday night tasting at Wine Wizard’s.

Now famous as the national wine of Argentina, Malbec once belonged to France, also called Auxerrois, and used as one of six  blending varietals in Bordeaux. A thin skinned grape, Malbec needed more sun and heat than Cabernet or Merlot to ripen. It produced a bold wine adding a splash of intensity, color and robust tannin to Claret blends. Sensitive to various ailments and therefore hard to cultivate, Malbec was nearly wiped out of France by an epic frost in 1956. Thereafter it was nearly abandoned everywhere except Cahors, a southern region in the Languedoc, where it is the main varietal in reds (at least 70%), blended with Merlot and Tannat. 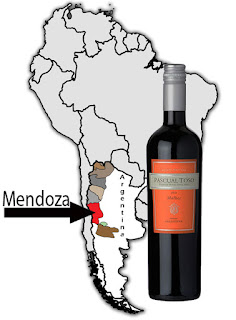 In the meanwhile Malbec took hold in the highlands of western Argentina, near the Chilean border, its production centered around the town of Mendoza. Brought from France in the late 19th century, the unique clone of Malbec, now thought to have become extinct during the European phylloxera epidemic that followed, was mostly used to make jug wines. In the late 20th century, as Argentinian viticulture and oenology shifted toward premium wines, a new, unique expression of the varietal took hold and flourished, overtaking its Cahors counterpart in reputation. 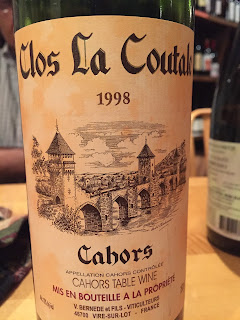 On Friday night we encountered two Cahors, a 1998 Clos la Coutale, a Kermit Lynch stalwart,  and a 2013 Chateau La Grave. The former was more robust than its Argentinian counter parts, and with Brett flavors. The La Grave was subdued, with pomegranate flavors and Italian style acidity.  Neither were to my liking. 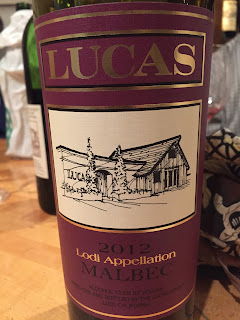 But then yet another surprise, a third Malbec, this one from our own backyard in Lodi, produced by a friend of ours, David Lucas. Dark, with a Bordeaux-like nose, with big upfront fruit but not as big as its trans-continental counterparts, it was well balanced and easier on the palate, with a brief finish as its only shortcoming.

Since no one in our wine group is a Malbec aficionado, three in a row in one night was a rare coincidence and a suitable coda to the Heron tasting.

At George Heron’s our friend Dr. Padmesh mumbled audibly while we were all quietly tasting and taking notes. “It should remain a blending grape,” he said. By the end of our Friday tasting I realized how accurate he indeed was.

WHY DO WINES TASTE DIFFERENT IN A WINERY?