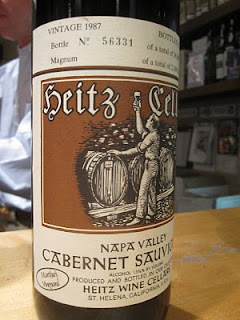 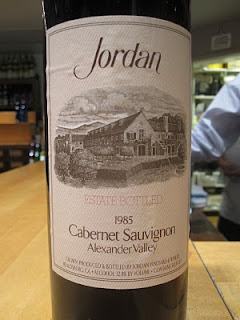 In the Francophile culture of my wine tasting group a cardinal rule of wine collecting is that domestic wines, especially Napa, do not lend themselves to long term cellaring, and those who undertake such ventures are foolhardy. My wine mentors did have a few exceptions to this rule, e.g. pre-corporate Chalone Pinot Noir, Stony Hill Chardonnay, but these were almost all comprised of domestic products made in a French style. Napa Cabarnet in particular was considered particularly risky, since it is so expensive, and prone to spoilage with aging.

In my early days of wine collecting back in the late 1990’s, I remember a memorable incident that underscored this point from a different, but even more venerable source. I went to George Heron’s store Fine Wines here in Stockton, and encountered the late Gene Quilter who used to staff the counter in those days. Those of you who knew Gene can attest to his impeccable credentials as a wine expert, and his rather opinionated views expressed with a charming Irish accent. I presented myself as a novice and told him that I was starting a wine cellar and needed advice on what domestic wines I should purchase as a core of the collection. Gene did not miss a beat; he said, “don’t!”. He then went on to expound on how unreliable such wines were, how non-ageworthy they could be, and that my outlook should be reoriented towards Bordeaux. We then poured over a list of Bordeaux futures Fine Wines had released and he marked a number of names for me to buy. That list of Gene’s was my guiding light for many years until I learned more about Bordeaux and began making my own purchasing decisions. In the meanwhile, my burgeoning wine collection turned into something that was nearly 100% French.

Imagine my surprise then, when last Christmas I walked into a 2000 bottle private cellar here in Stockton, composed almost entirely of domestic wines, mostly Napa. It belonged to Steve Cottrell with whom I had tasted for many years, but sensed a different wine perspective between us. A tour of his cellar confirmed this impression. I knew France very well, and he knew Napa/Sonoma in such depth that it made me realize a huge gap in my knowledge base that needed to be filled in. Fortunately, generous as he is, Steve has been working on this gap the way it should be done, bottle by bottle.

Case in point was a dinner I hosted last night at Wine Wizard’s, prepared by none other than Dave Cook (see my May 2 2010 blog), to which Steve brought two bottles each of 1985 Jordan, an Alexander Valley Cabarnet, and the much respected Heitz Martha’s Vineyard from 1987. These wines were very much alive and well. They displayed distinctly different styles. The Jordan was more food friendly, ligher in extraction, with a wonderful Bordeaux-like nose, well balanced, and with a surprising wallop of acid in the finish that I usually ascribe to Old World wines. The Heitz had a characteristic Napa eucalyptus nose, was much higher in extraction, displayed bolderflavors like cedar, mint & cocoa, was well balanced, and a bit higher in alcohol than the Jordan. If I had encountered the Heitz in a blind tasting I would have guessed it no more than 5-8 years old. For a 23 year old wine it was amazingly “young” on the palate.

There were 12 participants in the dinner and we all noticed that the Jordans, nimble as they were, disappeared first. The guests had voted with their mouths without saying much about the wines. The Heitz, however worked well as a sipper, especially after dinner. This dinner also featured two bottles of 1982 Far Niente Cabernet discovered accidentally in the cellar of a family member of Willie Wallace. The bottles looked old, and were over the hill, but still drinkable and were completely consumed by the group.

This dinner, along with the earlier Opus experience, also compliments of Steve Cottrell (see my April 8 & May 2 2010 blogs), and yet another occasion for a wonderful 1981 Jordan from Steve, seem to disprove the notions of the wine mentors who formed my early impressions years ago. There are indeed ageworthy domestic wines, but as with all wine collecting, they need to be purchased with the prudent advice of a suitable guide. I may be too old to venture into this area at this point, and should remain content with the generosity of friends like Steve. But then what the hell! Maybe it’s time to start with a few Jordans.