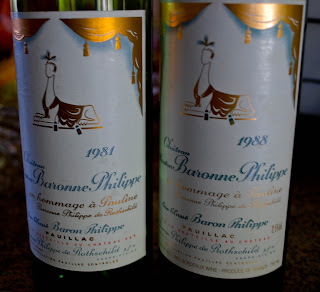 Our Friday night wine tastings which consist of a “bring your own concealed bottle and let’s guess what it is” game, are casual and devoid of any particular theme.  Thus when coincidental themes emerge, and they do more often than you think, those tastings are forever recalled as special.
A recent one in my house featured  just this very phenomenon. Mel Stagnaro brought along a 1988 Chateau Mouton Baron Phillipe, the second label of the famed First Growth, and it appeared as the third tasting in the line-up. We all guessed it as an old Bordeaux, not too bad, but a bit thin; a good drink but nonetheless showing its age. As luck would have it, I had chosen to contribute this very same wine, its 1981 version by sheer coincidence. I demanded that my concealed bottle be next for tasting. The 1981 turned out different. It tasted younger, more fruit forward, more robust. Everyone again guessed Bordeaux, but speculated whether this was a 1997, or maybe 1989. Imagine the surprise when it was unveiled and our serendipitous mutual choice revealed.

In the meanwhile Bob Browne had brought a 1988 Ch Phelan Segur, another Bordeaux from St Estephe, and this allowed yet another serendipitous horizontal comparison for that vintage. Again, it showed more robust than the Baron Phillipe.

The most surprising tasting of the night however, was another bottle I contributed, and it came at the very end of as the 8th bottle. This was a dark wine with a distinctly vegetative, celery-like, Bloody Mary nose. In general such strong vegetative qualities in the nose portend a bad experience in the palate. Not so with this one. It was fruity, soft, complex and well balanced. Everyone guessed it as a Right Bank Bordeaux (Pomerol or St Emillion). Many noted that this was “the best Bordeaux of the night”.

Guess what? The wine was a 1994 Mont St John (photo below), a little known winery at the easternmost end of Carneros. My friend Archie Steele and I used to frequent it in the mid 1990’s until it got discovered by tourist buses and we were elbowed out. The wines we bought from them, mostly Cabarnets, have uniformly been bad experiences in wine group. I had quit presenting them years ago, and added this bottle to the line-up with much trepidation. Imagine my surprise when this 1994 finally matured into something that rivalled the other, more respected French labels.

Delightful surprises such as these are part of the fun of shared wine experiences. The only way to keep everyone honest is to taste them blind and have opinions expressed without any label or price bias. I am quite sure the Mont St. John would not have gotten such good reviews if the group knew what it was ahead of time.

On we go with the endless journey of exploring the wine world, certain that more such pleasures await us in the future. 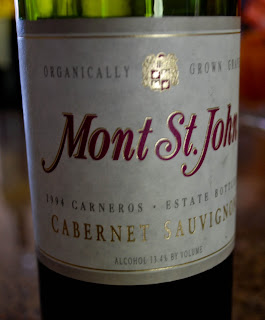