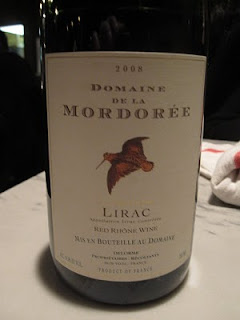 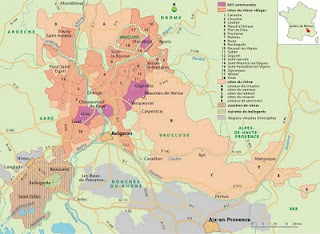 Those who read my blogs probably know that I am constantly seeking bargains in restaurant wine lists, which can otherwise be outrageously expensive, especially in San Francisco. You also may know that, in my opinion, the best way to do this is to select not by specific wine label, but rather by appellation. For instance if you are seeking a Domestic Pinot Noir, pretty much anything that says “Carneros”, or “Russian River” (there are several others) is good. All you then do is look for a price you are willing to pay. In general the lesser known the appellation the better the bargains. Thus, don’t look for easy prices in Napa Chardonnay or Cabarnet. They are famous and in demand, and the laws of supply and demand are fully in function.

Last night I experienced a wonderful example of this modus operandi at a neighborhood restaurant in the Marina District of San Francisco called Bistro Aix. The place was busy and casual, the service equally informal and friendly. The wine list was small (one page) and had a smattering of prices ranging from affordable to no more expensive than around $150. Believe it or not, in many San Francisco places, especially the high end restaurants, $150 can be the median price in an encyclopedic wine list. The list at Aix seemed equally casual and friendly as the atmosphere. I selected an appellation I had never before ordered in a restaurant: Lirac.

Located in the Southern Rhone Valley of France, Lirac sits on the west bank of the river, literally facing the queen of the South Valley: Chateuneuf du Pape. Don’t expect any bargains in the latter, especially in restaurants. At Bistro Aix several Chateauneufs were all above $100. The Rhone Valley used to have two other appellations that gave you value at Ch. du Pape quality: Gigondas and Vacqueras, but alas, they have been discovered. In most wine lists they now appear with higher mark-ups. So now, the labels to look for are Rasteau or Lirac. You can also look for the Cotes du Rhone or Ct. du Rhone Villages designations, but here, especially in the former, you get a heterogenous bunch of labels, some good, some not, and it is a bit more of a gamble.

The wine we got, Domaine de la Morderee, a label I had never heard of before, turned out as I expected, smoky, gamy, with more of a grenache flavor in the palate than syrah, moderately high extraction, with good acid in the finish. It went well both with chicken and fish, the dishes Julie and I ordered. It was $ 44 in the restaurant, definitely a bargain by San Francisco standards. It retails for $25, not a bad mark-up by Bistro Aix. Another secret of the wine-list game is that the mark-ups tend not to be uniform through given lists. Wines in more demand, or maybe those aged in the restaurant’s own collection, tend to receive higher mark-ups.

For those of you who like beefy, high extraction wines, without much oak and with enough acid in the finish to be food friendly Lirac is certainly a bargain. The grapes are a combination of Grenache, Syrah, Mouvedre, Cinsault and Carignane, the usual Southern Rhone mix. Lirac also makes whites, with a mixture of Clarette, Bourboulenc, and Grenache Blanc. They are less commonly encountered in the U.S.

Proud as I was for having spotted a bargain that enhanced what turned out to be a very nice meal, when I researched the wine, I discovered that in 1998 this same label: Domaine de la Mordoree used to retail for $9.50. Ugh! I’d better not think about that too much. In looking at wine prices, what used to be, is always more depressing than what it is now.