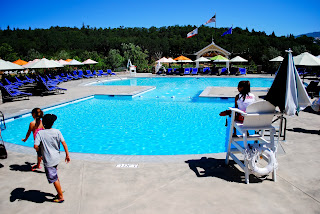 This blog is not about wine.

The picture you see above seems like a warm weather resort, but it’s not. It is actually the latest incarnation of the Francis Ford Coppola winery in Sonoma, right off Highway 101 near Geyserville. Visitors to this winery are greeted by various layers of orientation to direct them to activities featured there which include a giant swimming pool with a stage area in the background which is a replica of the wedding scene from Godfather II. Lining the pool are Italian style cabana changing rooms, dark blue chaise-longs and multicolored umbrellas. Various uniformed wait staff circulate to take food and drink orders. Further over, for those who shun the sun, there is a large circular bar when one can sit and order drinks within sight of the pool. It all is reminiscent of any resort in Hawaii, Florida or the Caribbean.

The enormous building behind the pool, the old Chateau Souverain estate, features a personal museum to Coppola’s movie accomplishments , including a display of his Oscars, the “Tucker” car, the Corleone desk from “Godfather”, as well as large models of tall ships used in the movie “Antoinette” that his daughter Sophia made. In between all this are multiple wine tasting stations, and a busy Italian restaurant with a gorgeous view of nearby Coppola vineyards and the surrounding Alexander Valley. We arrived there about ten minutes to eleven in the morning on a Sunday, opening time. We found a long line of families waiing to get in and experience the numerous offerings.

Coppola is a larger-than-life personality who has always pursued great dreams and visions both in his former life as movie-maker and now as wine-maker.He was near bankruptcy several times as he made his iconic Godfather movies and subsequently Apocalypse Now, which are all classics. His vision for wine has also been grand. On the one hand Coppola has attempted to replicate the wine ethic of his Italian heritage which can be summed up as “no big deal”; everyone drank wine with food, including children, and they made no fuss about it. The wine was not the best, but it was cheap, abundant, and a way of life. In his Sonoma estate he has replicated this aesthetic. Come here with the family, have a good time at the pool all day long, eat and drink out of our offerings and don’t be a wine snob like the rest of the California Wine Country.

On the other hand, Coppola has had a vision of re-creating the grand old Inglenook Estate which used to make exquisite wines when such were not appreciated. He has spent over $40 million and over two decades buying up  and reuniting old Inglenook vineyards, winemaking facilities and most recently, the label itself which had been kicked down to unimaginable levels of low respect. Coppola believes that he will not live to see the rise of Inglenook from the ashes that he has instigated as his life mission. His children will carry on in this project.

Behind the swimming pool, restaurant, museum and fancy tasting rooms is a massive wine factory with a bottling operation that operates at a rate of 120 bottles per minute in 16 hour shifts Monday to Friday, and a forest of steel tanks each holding 180,000 bottles of wine. Those who swim in the pool would never be aware that they are in the grounds of a major industrial operation feeding Coppola’s line-up of numerous wines at various price points.

Francis Ford Coppola has been a visionary all his life, both in the movies and in the wine world. His Sonoma creation is like no other winery anywhere, combining a resort aura with wine-tourism. I am quite sure a nearby hotel and a Disneyland-like attraction is in development, although those who work there are not quite certain of it. Say what you can about Coppola, he certainly pursues his own path.

And how are the wines? I guess you might ask that. I didn’t taste any on this visit. Coppola’s resort can be as attractive to a teetotaler as any wine enthusiast. As I said in the beginning, this is not a blog about  wine.