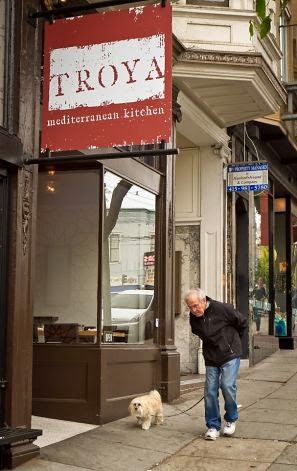 I have decided to take a short detour from wine every once in a while, to the closely related subject of food. Last night we had a jolting but instructive experience at a San Francisco restaurant I have come to know well, that exemplifies  culinary trends in the city.

Troya has been my favorite Turkish restaurant of the many that have sprouted all over the Bay Area. In business for a decade, initially as a neighborhood place in a busy corner of Clement Street in the Richmond district, Troya has always featured Turkish cuisine with a decidedly San Francisco slant.They have livened up such standard staples as cigarette boreks, meat dolmas, manti (Turkish meat ravioli), mucver (zucchini fritters)  and muhammara (a roasted red pepper and pomegranate mollasses dip) with high quality,fresh, savory ingredients and a creative assortment of spices. Their lahmacun (ultre-thin crust, spicy Turkish mincemeat pizza) has been most redolent of the “real thing” I remember from my childhood in Turkey.

I have regularly patronized the restaurant enough to get acquainted with the owner, a diminutive, surprisingly young, soft-spoken guy who regularly patrols his floor and bar, pitching in on all tasks, easily mistaken for a bus-boy, rahter than the proprietor.

I was thrilled when he decided to open a second branch of Troya in the swank and busy Fillomre avenue strip, hip with young techies and Bay Areas foodies. Freed from the hassle of travel and parking in the distant Richmond district, I have mostly followed Troya in Fillmore, where it evolved into an even stronger San Francisco style, paring down its menu to fewer but higher quality items, featuring a small but eclectic wine list, venturing farther than its Turkish roots into a more Mediterranean identity, liberally sprinkled with popular seafood items common to the Bay Area. But the boreks, dolmas, dips, mucver and lahmacun remained the same, if not better.

Last night we were surprised with a menu that was now farthest from Turkish, the popular dolmas and boreks gone, the zucchini fritters replaced by fried green tomatoes (definitely not Turkish), the lahmacun unrecognizable with new citrusy flavors in its mincemeat and sprinkled with feta cheese (whoever heard of lahmacun with feta on top!). Even the muhammara, still on the menu had changed some, spicier and more tangy. The remainder of the menu was dominated with a diverse variety of items common to Bay Area restaurants, loosely anchored to Turkey with nouveau takes on traditional Turkish sauces.

Afterwards the owner came over and amid the busy din of an overcapacity crowd asked, “What do you think? Is it too way out there?”

It was, but we politely concealed our disappointment, complimenting him on the food, gently asking for a return of the boreks.

“My Turkish clients hate this new menu,” he said.

We understood but stayed quiet.

“I have to do this in the Fillmore,” he added. “We now renew our menu weekly. This being summertime, we took out some of the heavier items and replaced them with lighter, more warm weather ones.”

The weather was in the 60’s, overcast, windy and cold, a typical summer in San Francisco.

Then my wife Julie asked a most revealing question.

“Have you changed the menu in your Clement Street place too?”

“No way!” he answered. “Are you kidding? I have a long established clientele there. They would kill me if I did.”

There it was, the divide between the young, fickle, techie, yuppie foodies downtown versus the long-term, possibly older, more traditional foodies of the neighborhoods.

The owner promised a return of the missing items in their winter menu, when ironically, the weather will be warmer. With that we accepted his bonus baklava, paid our bill and made a mental note to return wintertime.

Oh, and by the way, we had the above bottle of 2013 Ch St. Cosme Cotes du Rhone with our meal. Young, high extraction, with meaty, smoky, bacony flavors typical of Southern Rhone, it was a touch sweet in mid-palate, but abundantly acidic in the finish, complementing everything well, without breaking the bank.