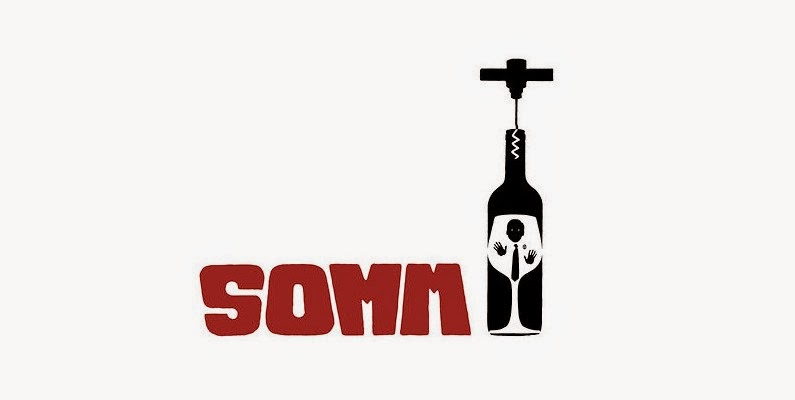 “Four men will do anything to pass the most difficult test you’ve NEVER heard of,” says a review in Rotten Tomatoes, about the movie Somm (2012),a documentary directed by Jason Wise.  I finally got around to viewing this film and, wine savvy as I think I am, I too had never heard of the Master Sommelier Exam that this movie depicts.

It is about four thirty-something sommeliers preparing for this very difficult exam, vying for a much coveted – and rare – Master Sommelier title, and the red lapel pin that comes along with it. The test has a meager pass rate of only 5%. Our heroes cram for this impossible hurdle as is their life depended on it, and indeed they seem to feel that way. So do their exasperated wives and girlfriends who look forward to the end of the ordeal and hope for a return to normal human life, uninterrupted by endless wine zeal.

The Master Sommelier designation is the highest and most prestigious in the wine world. According to the current web site of the Court of Master Sommeliers that administers the test, there are only 219 such individuals in the world, 140 in North America. Of the latter, only 21 are women. Wine seems to still be largely a men’s game.

The Court offers four levels of testing, Introduction, Certified Sommelier, Advanced and finally their Mt. Everest, Master Sommelier. Candidates need to pass the first three before taking the last test. The test has three elements. The first, “theory” is all about fund of knowledge, not only about wine, but also spirits and cigars; but wine still reigns supreme. In the movie we watch the anxious candidates study with hundreds of flash cards about obscure wine terms or wine regions, endlessly, obsessively quizzing each other. “What are the six wine appellations in Romania?” Who cares? They do.

The second exam is about “Service”. Here our harried candidates are put through the ringer in mock restaurant settings with authentic Master Sommeliers acting as interlocutors and impossibly difficult customers. One of them is Fred Dame, the first American to have received this title and therefore a celebrity in this tiny guild. Now in late middle age, he is tall, stocky, brusque and yet avuncular. The examinees dash about as Dame harasses them with an unreasonable demand to instantly chill a bottle of red wine, one of the most difficult tasks in the wine world as it turns out.

Finally there is the “Tasting” exam, the toughest of them all. The young men get all groomed and dressed up, (the Master Sommelier world is formal and dapper) and anxiously eye six glasses of wine, three white, three red, which they have to accurately describe and identify  within twenty-five minutes. To this end, the movie shows us numerous group tasting scenes as the heroes speed-taste and speed-spit, offering each other even speedier, pressured descriptions of their wines. Differences of opinion are prevalent both in these prep-tastings and alas, in the test. After all, only a few will pass.

The movie received mediocre reviews from critics who found its plot monotonous, predictable and undramatic, and its exploration of its characters superficial.

For me however it was absolutely fascinating. Here were four real people devoting every minute of their sleepless, waking hours to what I, for decades, have done for recreation. Their fund of knowledge was, by necessity, much wider than mine, extending well beyond France, Italy and California where my forte lies. But what they did in their tasting exercises,  blind tasting as a group, discussing and attempting to identify wines, is what I also have done weekly for years. Theirs seemed so similar to my own wine group.

In the end, as I observed how consumed they were with their ambition, I was grateful that my interest in wine is just recreational. It is definitely more fun that way. AMARONE IN BELLAGIO; A SHORT STORY