Is the current Chardonnay craze, now ongoing for two decades plus, about to come to an end? Is Chardonnay on the decline, destined into the same junk heap as French Colombard or Valpolicella, favorites from another era? The backlash against this immensely popular grape began with wine snobs who created the “ABC” movement (Anything But Chardonnay). Then came a response from domestic winemakers: unaked Chardonnay, an attempt to return to the basic French Burgundian essence of the wine, and undo the excesses of oak and buttery texture New World winemakers inflicted on this wine. This weekend I discovered another response from winemakers, this one economically motivated, which indicates the expansion of the varietal is at an end.

Exploring the Edna Valley appellation of the Central California Coast, I came upon two wineries which did not have Chardonnay in their line-up. The first, Claiborne & Churchill is a relatively small, family owned winery which has been in bussiness  since 1983. Two whites they featured caught my attention. These were Riesling and Gewurtztraminer done in the Alsatian style. When I tasted them they displayed surprising fidelity to Alsace. “There aren’t too many domestic winemakers who want to emulate Alsace”, I muttered under my breath, “the only one I know is Thomas Fogerty” (Fogerty is a winery in the  Santa Cruz hills near San Jose). A middle aged woman behind the counter heard me and responded. It was clear that she was one of the owners. She said, “well, we did not want to be the 600th Chardonnay in Calfiornia when we opened back then. Now we would be the 2000th? 3000th? I don’t know.”

There is was. Someone with foresight, had seen the Chardonnay craze on the uprise way back then and steered clear of it. In the process it was able to distinguish itself from the peloton of countless wineries whose names blend into each other with their line-ups. I certainly will remember them, for they were the only one in that Valley that offered these uniquely made varietals.

The next day, upon returning to the Edna Valley, this time I came upon Saucelito Canyon, another small local outfit which has already been noticed by the inluential wine writer Matt Kramer, who in 2007 included one of their Zinfandels in his top 5 wines of the year. The line up of this winery was most unusual: a white Bordeaux blend, a white Rhone blend, various unique Zinfandel blends that reminded me of Ridge (not in style, but rather in the attention they were paying to this niche), and a Spanish style Tempranillo blend. The wines were all surprisingly Old World in their style, lean fruit, crisp acid, some tannins; they were mostly food-friendly wines. Considering the out-of-the ways, small tasting room we had found in a back road, I was pleasantly surprised by the uniqueness of this winery.

At the end of the tasting I popped the question: “do you have any Chardonnay in your line-up?” The woman at the counter, this time an employee, answered in the negative. “No”, she said, “we didn’t want to compete with all the Chardonnay makers in our area”. Slightly different answer from the prior winery, but in essence the same. Both had seen the ubiquity of the varietal and stayed away from it. 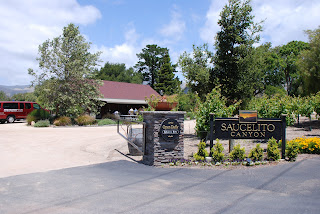 The actions of these two wineries have nothing to do with trying to appear trendy. Rather, they are based on hard economic reality of successfully competing in a crowded marketplace, and creating a bussiness image that stands out. Finding not one but two wineries with the same philosophy in this small region, I realized that Chardonnay has finally saturated the marketplace to the degree that avoiding it makes economic sense. Now we’ll wait for the consumer to get sick and tired of it. I predict this is not too far from now.

THE STINK IN “SPECIAL”