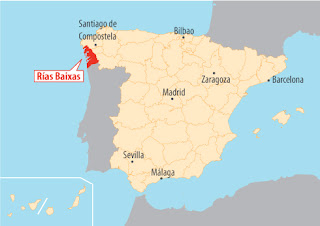 There are some wines that should not be intellectualized. Just buy and drink, preferably with matching foods and enjoy their simple pleasures. For me Albarino is foremost on that list. I have been buying them in Bay Area restaurants for years and enjoying them with seafood tapas and appetizers, with minimum curiosity and understated pleasure. It’s a wine that has previously flown below most radars but nowadays better recognized, no longer a secret bargain in wine lists. As summer approached and our thoughts naturally turned to whites, going contrary to my instincts, I proposed an Albarino tasting.

Albarino is the main grape of the Rias Biaxas region of Spain, in Galicia (Basque country) not far from Santiago de Compostela. It is a tiny north-western corner of Spain, immediately north of the Portuguese border, facing the Atlantic Ocean. Composed of a series of four estuaries, Rias Biaxas is warm and humid, benefiting from the Gulf Stream nearby even though it is at the same latitude as Massachusetts.This affects the wines produced here.

The word “alba” means white wine and “rino” refers to the Rhine River. White wine from the Rhine in Spain? No one quite knows the origin of the grape but there is speculation that it was brought to the region by Medieval German monks while in pilgrimage to Santiago.

The grape makes for crisp, vibrant, fruity wines, with floral, viognier or gewurtz-like bouquets, hints of apricot, peaches, pear or green apple (depending upon the style) and lots of acidity. A distinct pre-finish or finish bitterness is also typical. 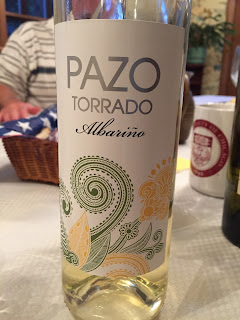 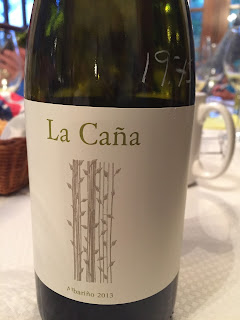 They all more-or-less fit the general profile, with the La Cana on the more floral, viognier-like side, the Pazo crisp and citrusy. and the Albarei 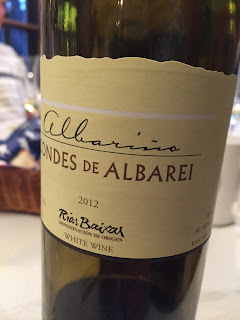 the longest, most complex of the three. All were wonderful food wines, the Pazo a best bargain.

It so happened that we also had two domestic Albarinos. As with all from the Old World, copies can be found in the New. Of those, one I have sampled many times before showed well in our tasting. It was a 2013 Bokisch from our own backyard in Lodi. 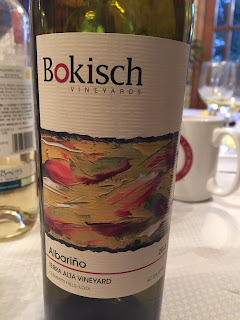 Lighter than its Spanish counterparts and a bit more buttery, it otherwise adhered to the varietal’s characteristics quite well. At around $ 17, for me, it is one of the best whites from Lodi (those who know me will attest to how much I detest Lodi wines and therefore what an unusual opinion I am expressing.)

Another, 2012 Tangent from Edna Valley, 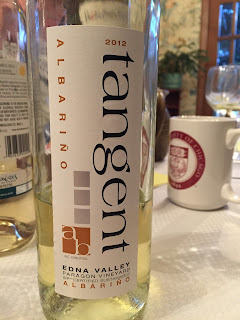 was toasty in the nose and upfront palate and, while not overoaked, nonetheless betrayed exposure to wood in all its phases, the wood overpowering the fruit. George Heron, our host and owner of Fine Wines, pointed out that with dainty grapes like Albarino  it is easy to wipe the fruit with careless wood exposure. This wine also had a subtle but clear hint of sulfur. All these defects, I am sure will appeal to certain palates. Still, the wine did not belong in the company of its Spanish counterparts.

When it comes to white wine I have had a peculiar division between what I exclusively order in restaurants, including many Italian varietals (Alto Adige products, Friulano, Fallanghina, Vermentino), Verdelho and  Albarino, versus what I drink at home, mostly Chablis 1er Cru. I  am trying to break this barrier, the origins of which I don’t quite understand. At this point Albarino is a better bargain in wine shops than in Bay Area restaurants. So why not stock up on some?

I have a bottle of La Cana left over from this tasting. Maybe it’ll be the nucleus of more to populate my white wine refrigerator in my garage. In the meanwhile, I think it’s best to return to my guzzle-and-enjoy philosophy with Albarino. I don’t think I will propose more tastings.