A TURKISH SURPRISE IN WINE SPECTATOR 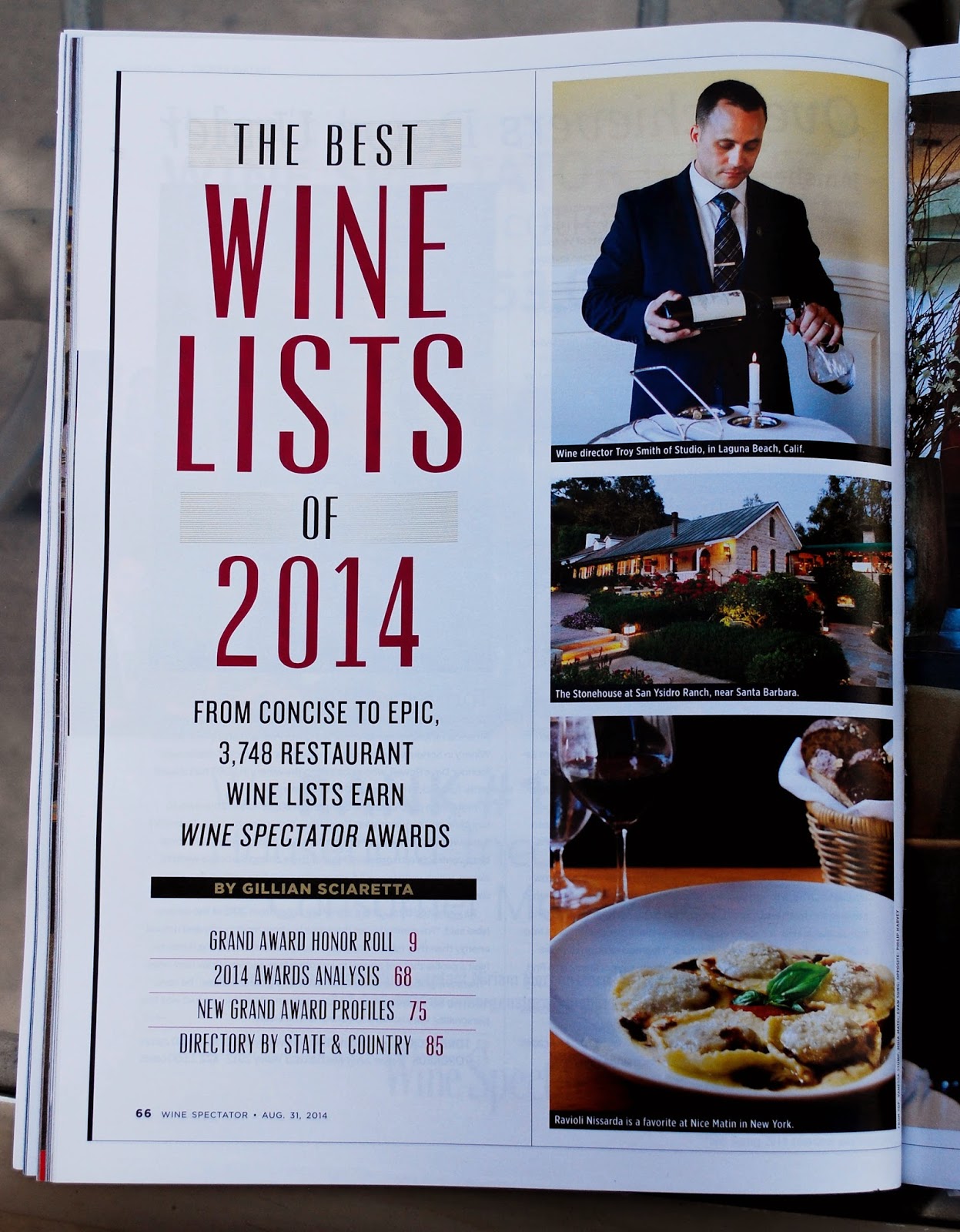 Wine Spectator, an influential U.S. monthly, issues a yearly list of wine friendly restaurants. Entitled The Best Wine Lists of 2014, this year’s edition just appeared. It is a massive compilation, currently  over three thousand, of mostly U.S. restaurants, often including some highly respected ones in major cities, wine destinations, and lesser known establishments with local reputations. Foreign countries are also included. The listed restaurants have only one common feature: exceptional wine lists.

As I browsed through it I was taken aback by a listing of 21 Turkish restaurants, all in Istanbul except for two. It was larger than France (14), Italy (19) and Spain (8), certainly the biggest Turkish representation in the magazine ever. Here’s the list: Brasserie La Brise, The Breeze (Marmaris), Da Mario, Emporio Armani Ristorante, Flamingo Istanbul, Frankie Istanbul, Gina, Lacivert, Lavanda, Macakizi, Mikla, Nusr-et Steakhouse, Parle, Raika, Sans, Seki (Nevsehir), Sunset Bar & Gril, Topaz, Ulus 28, Vogue, Zuma.

How does Turkey, a Muslim country with a negligent wine tradition, make a larger appearance in this list than some of the powerhouses of Europe?

The answer lies in how Wine Spectator compiles their list. Unlike say, Michelin or Zagat, the magazine does not send reviewers to these restaurants. Any interested restaurant can assemble a wine cellar with some breadth in vintage and geography, enough to pass muster with the magazine. They can then submit their wine list along with a fee, and they get in.

I learned all this when Le Bistro, a now defunct French restaurant in Stockton that had been in business for decades, unexpectedly appeared on the list a few years ago. Curious, I inquired with its sommelier and he told me. There had been a recent change in ownership and the new owner had upgraded the restaurant’s cellar, specifically in search of this distinction.So have these Turkish restaurants, I presume.

On the other hand Italians, Spaniards and the French, already well-known for their cuisines and wines, probably don’t give a damn about Wine Spectator or their mostly American, nouveau-wine-snob readers. They have enough business without them, thank you. Thus few submit their wine-lists or pay the fee.

U.S. restaurants do care. The list has well over 300 from California, around 100 from Florida and Illinois each, and around 200 from New York. Every state is represented.

Turks, more  tourist conscious than ever, also seem to care, especially nowadays, with the country more Westernized than ever and Istanbul establishing itself as a major culinary capital in Europe. They are therefore more willing to undertake the expensive effort to create significant wine-lists. Having done so they are apt to seek publicity in an outlet like Wine Spectator, more so than France, Italy or Spain, since Turkey is lesser known.

Another peculiarity of this Turkish presence in the Spectator is that  Muslims are forbidden to drink alcohol, a fact that seems to be lost on many urban Turks. They have a traditional national drink, raki, akin to ouzo, that they consume prolifically, composed of 45% alcohol. They are now also showing more interest in wine.

Scanning the remainder of the Wine Spectator list, I found a few other Muslim countries in it:
Lebanon, Omar and Quatar with one restaurant each, Malaysia  with two, and UAE fifteen.There, another one that cares.