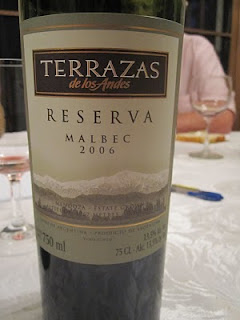 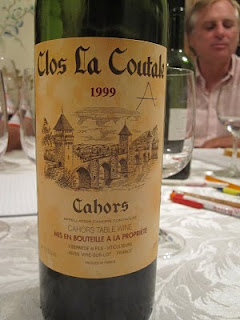 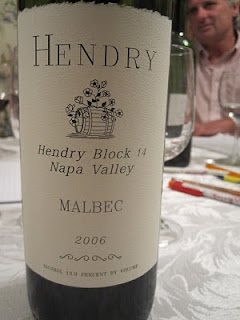 Sometimes it is difficult to draw take-home conclusions from theme-tastings involving less than 10 bottles of wine. I experienced such an anticlimax last month with a Chilean Carmenere tasting. They all tasted like California Cabarnet or Merlot. I found no distinguishing features that would allow easy identification in a blind tasting.

Imagine my pleasant surprise last night when another South American star yielded a much more conclusive experience. Our goal was to experience Malbec, the Argentinian version. This is a grape that many in my wine circle taste on occasion, but not with a frequency that would allow easy familiarity. We had five Argentinian bottles in this tasting (see appendix below). As it so happened, we also had a bottle from Napa, and another from Cahors, a region in Southern France which is the sole remaining home of this grape in its original home.

Malbec was at one time a varietal that went into Bordeaux blends. Like it cousin Carmenere it fell out of favor in its home in 1956, when a frost killed more than 75% of the crop. It found a new niche in Argentina which has now adopted the grape into its national identity. In France it survived in Cahors, where it is blended with Merlot or Tannat. North American winemakers, forever in seach for the next best thing have also extensively experimented with Malbec, not only in Napa and Sonoma, but also in Paso Robles, Wala Wala, Oregon, Texas, New York and various other states not well known for wines.

The grape remains primarily Argentinian in its current identity, mainly grown in the Mendoza region, from where all five bottles in our tasting originated. These featured variable styles and prices but common denominators distinguishing them from their French and American counterparts. Actually it was the other two that stood apart from the Argentinians with their uniquely “local” characteristics. The Cahors was unmistakably French. It had a Bordeaux-like nose, multi phase complexity on the palate, a uniquely French peppery upfront fruit with follow-up tannins and acid that was like a “rough” Bordeaux. The specific bottle, Clos La Coutale is a Kermit Lynch staple at Wine Wizards, 70% Malbec- 30% Merlot, and we were tasting a 1999, the oldest bottle in the group, making it yet more of a specialty item. Nonetheless, Cahors stood out easily as itself.

Then there was the Hendry from Napa. How predictable! I have always said – referring to white varietals – that California winemakers have an uncanny ability to take any white grape and make it taste like Chardonnay. Well, they can also do the same with reds, usually making them taste like Merlot or Cabarnet. The Hendry was also easy to pick out from the group; a chocolaty, almost port-like nose, followed with high extraction Cabarnet-like fruit, a sweet mid palate, and a big oaky finish. “Easy guess!!”, I wrote in my tasting notes, while we tasted them all blindly.

So what about the Argentinians? They had variations on peppery, ripe fruit noses, and big ripe upfront fruit profiles, and generally less complex progressions on the palate. They all however had one feature that I found unique to them. Most wines that start with big, ripe, warm-weather fruit follow up with tannins, maybe some sweetness in mid-palate, and for sure high alcohol and oak in the finish, i.e. they start “warm weather” and end the same. These Mendoza wines, surprisingly, followed their ripe upfront flavors with cool weather finishes that I characterized as “cranberry, cherry, root beer”. Nor did they have overbearing oak or alcohol. The ripe beginning- unripe ending contrast was something I found unique to them.

Argentina has numerous Malbec labels drawn from 356,000 acres planted. While it is not totally reliable to draw the above conclusion based on 5 bottles, it is, in my opinion, a good start. Would I try more? Look at my list in the appendix and notice some of the prices. At some of those prices, you bet you!