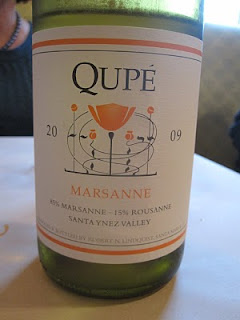 We recently had lunch in a popular spot at Sonoma Square called “The Girl and The Fig”. It is a homey looking place set within three rooms of a converted house. One has a magnificently ornate bar with dining tables; the other two must have been the living and dining rooms. All are tightly packed with tables, making for a cozy, noisy environment. The art on the walls resembled the style you see in the attached picture of the restaurant’s emblem. The menu was French bistro fare translated to California cuisine, with fresh, carefully selected ingredients and some offbeat offerings like a plate of radishes for appetizers.
The feature that struck me as most off beat however, was their wine list. It was composed of Rhone based varietals nearly in its entirety, with the exception of a few sparklers. The list was subdivided by varietals, containing headings such as Marsanne, Roussanne, Viognier, Grenache, Syrah etc. More than 80% of the offerings were domestic, mostly California. The foreign choices were few, but in my opinion some of the best values other countries offer. They included Domaine Tempier Bandol, Vacqueras Sang des Cailloux, Tavel (rose of course), and a granacha from Jumilla, Spain.
The menu and the wine list were one and the same, a long sheet of paper. I turned it around a few times, trying to ascertain if I was missing anything. I have never seen a wine list that excludes such big moneymakers as Chardonnay, Cabarnet, and the latest darling of the wine world Pinot Noir. No question at all, these were indeed missing. “Wow”, I thought as I went for a Qupe Marsanne. I had never tasted this offering from Qupe, a well respected Central Coast producer of Rhone varietals, but over the years everything I had from them was good, so what the hell?
It was a funky meal. I have never quite had a meal like this. My lunch consisted of a half plate of mussels (large black elongated ones), a plate of beets, and another plate of radishes. Everything was exquisitely good, and went quite well with the Marsanne. What a refreshing departure from the ho-hum bistro fares of the Bay Area, Wine country, or even France. The radishes and beets were no ordinary vegetables. It was obvious they had been carefully picked as the best of the bunch from some nearby supplier. An anchovy-paste laden butter accompanied the radishes as a dip, and worked surprisingly well with the Marsanne. The beets, whole and uncut, had a very light aeoli for accompaniment. No burgers, no fries, no eggs benendict (it was a Sunday brunch). A healthy meal. How unusual!
Afterwards when I looked them up on the Internet, I discovered that their rather bold wine list is not an accident. The restaurant proudly gives it a special label: “Rhone-alone”. It is so unusual to find business people who can sync their work to their aesthetic, refuse to bend to commercial pressure, and still make a good go at it. Judging from the packed crowd that day, in a rainy weekend when Sonoma Square was otherwise abandoned, they’re doing well. All I can say is “bravo”.

FINALLY, AN OCCASION TO OPEN A 3 LITER