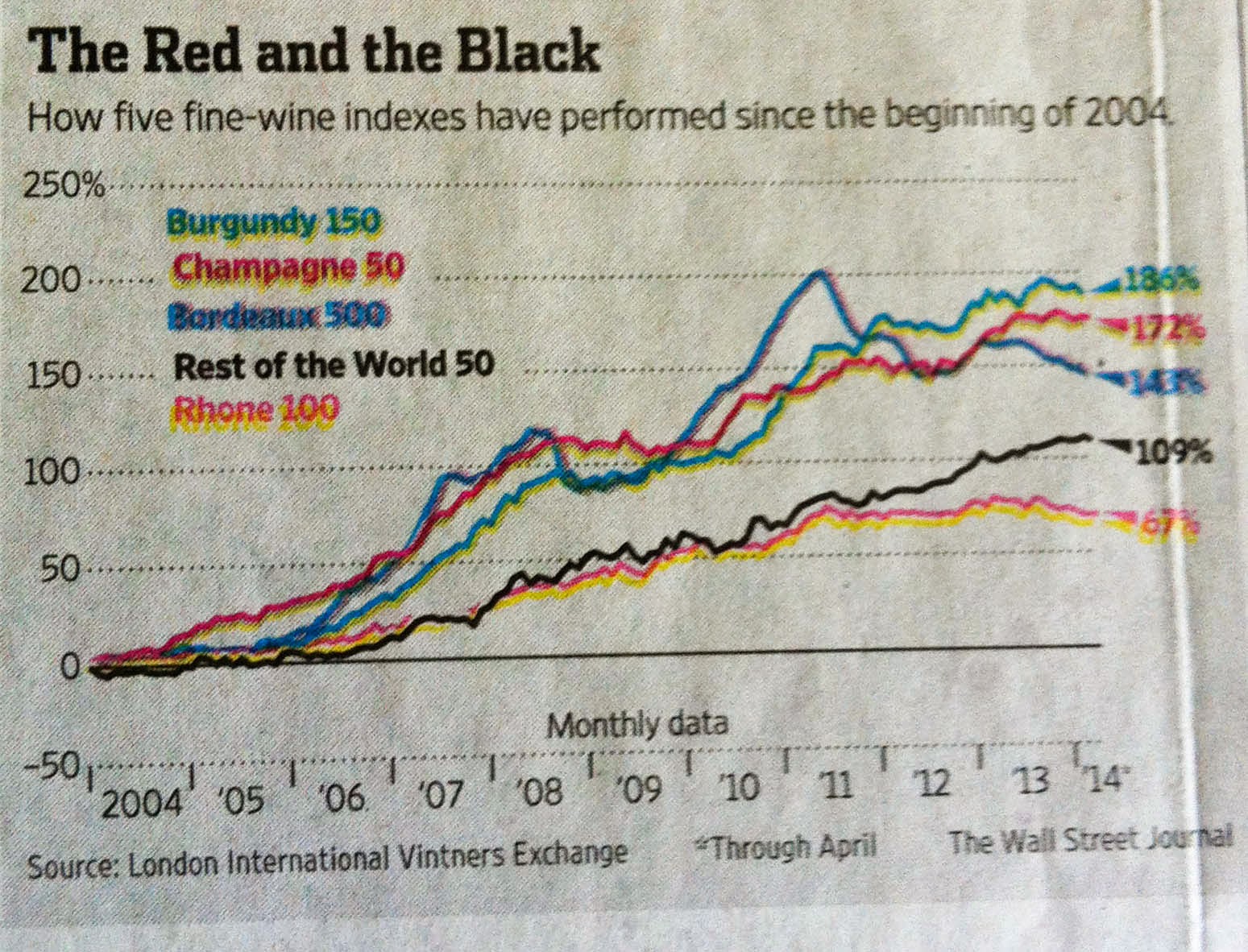 A recent Wall Street Journal article (5/31/2014) discussed the pros and cons of wine investing in a rather dry, technical exposition. Investing in wine? asked the headline. Sip, don’t gulp.

It went on to explain what a fickle investment wine is. While wine prices have beat the inflation rate by an average 5.3% per year (in records that go all the way back to 1899), investment returns on wine have been “lumpy and inconsistent”, falling very low in the aftermath of the Great Depression, rising very high during the Nazi occupation of France. and in recent decades, with the entry of Chinese nouveaux-riche into the market, rising again, only to fall as of 2011.

There’s also the cost of storage and insurance, reducing returns by 1.2% per year. As a luxury commodity, its price is dependent on the fortunes of the very rich and therefore not as predictable as say, real estate. Then there is the vexing issue of which wines to buy. The article recommend Bordeaux, of course.

Going unmentioned was a point so obvious that it tends to be forgotten: wine is the only investment that ultimately ends with its total destruction. No matter how many cellars and hands it passes through, wine has to eventually end up in someone’s gullet.

Can you imagine buying a second house, say at a nice beach, with the goal of annihilating it? Some investments do self-destruct. Companies go out of business, leaving stockholders empty-handed; municipalities default on bond payments; some real estate is destroyed by natural disasters. Still, no one enters such investments knowing that they will lose them.

Those who use wine purely as an investing vehicle assume that there will always be someone else who will hopefully pay a higher price for it and then open and drink the wine. It’s either that or an endless passing around of increasingly older wine bottles. Ultimately a true enthusiast has to emerge, rich enough to pay an outrageous price and dedicated enough to stop passing it on. The chain of new buyers, each entering at a higher price, in some ways resembles a Ponzi scheme.

As a wine lover who collects wine with the eventual goal of consuming it, I have low regard for investors who use fine wine as a mere commodity. They fail to appreciate the artistry that goes into its production and worse yet, they are numb numb to the joys of it. If I were the author of the newspaper article, I would label it differently. Investing in Wine? Gulp, and Choke on it.

THE VIRTUE OF CHEAP PINOT NOIR ROTHSCHILDS IN THE NEW WORLD