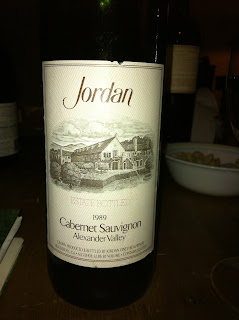 The great ascent of Northern California wine, which began in the 1970’s after decades of post-Prohibition stagnation, occurred emulating France. Domestic Chardonnay, currently ubiquitous and  mundane  was inspired by white Burgundy, and Cabarnet Sauvignon by Bordeaux. Nowadays these varietals come in divergent styles and prices. How well do they hold up against their French counterparts?

In general they don’t. One can say that California has come of age and demonstrates its own expression, its own terroir and style. Critics complain that many California wines are “commercial” copycats of each other, sloppily made and overpriced. Leaving style aside, when it comes to Cabarnet Sauvignon or meritage mixes based on this grape, a crucial point of judgement relates to aging potential. There are very few wines around the world which match Bordeaux in reliability when it comes to long term cellaring. In this regard some Northern California greats such as Heitz, Stag’s Leap, Dunn have proved their mettle.

Another, more understated standout is Jordan. Founded in 1972 and family owned and operated, this winery, located in the Alexander Valley of Sonoma has been consistently making good Cabarnet since 1976, its first released vintage. Winemaker Rob Davis, trained by the famed Andre Tchelistcheff, holds a distinction of having spent his entire career at Jordan. Unlike many others, Jordan does not have a huge diversified line-up of wines, just Cabarnet and Chardonnay. Also unlike many, despite a good reputation and following, it has resisted ridiculously high price points. Its current release, 2008 Cabarnet is in the $50 range.

In a recent Friday night tasting, our friend Dr. Padmesh, who has a well aged Bordeaux collection threw us a curve-ball. He presented two wines back to back for a blind tasting. The second one was clearly a well made, well preserved Bordeaux. It turned out to be a 1989 Ch. Phelan Segur from St. Estephe. But the first was intriguing. It had a classic Bordeaux nose, and in the upfront palate Bordeaux fruit characters (don’t ask me to issue numerous nouns to describe this; after two decades of tasting, my temporal lobe registers these as just Bordeaux). It was well balanced, and had a good, acid finish, no hints of oak. The only puzzling aspect was a wallop of sweetness in the mid-palate which is unusual for French wines.

A group of well practiced palates guessed both wines as Bordeaux. In blind tastings, when in doubt we usually go with whatever the nose tells us, and that first wine definitely featured a Bordeaux nose. Actually no-one expressed any doubt about the wine. When unveiled, a gasp of surprise: it was the above pictured 1989 Jordan.

There is no better judgement of how well a wine is holding up than a side-by-side comparison tasting, done blind. The ’89 Jordan stood very well against the Phelan Segur of the same vintage.  Jordan wines do not reveal their California identity when aged, because they have a more acidic end-profile than other Napa-Sonoma Cabarnets, and are devoid of  overstated oak, unfortunately so common otherwise. In this tasting I also learned about their nose, which did not have hints of peppery, eucalyptus character typical of California. However in retrospect, it gave its terroir away by the unavoidable sweetness, albeit not overwhelming, a commonfeatue of warmer climate California wines.

For those interested in cellaring California Cabarnet without breaking the back of their bank accounts, Jordan is definitely a good value in the long term.