In the historic French city of Strasbourg, a most unusual wine shop resides within a giant public hospital complex. Hospice Strasbourg, a 2000 bed hospital with an associated medical school, has been in continuous operation since 1395. It employs over twenty-three thousand people. Among them is a small staff that tends to the wine shop and cellar of the hospital, located in the basement of one of its buildings. 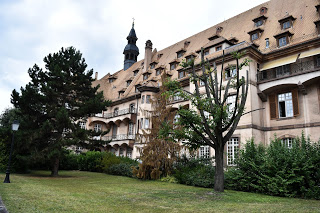 In Medieval times wine was not just an alcoholic beverage. It was considered medicinal. It was also an indispensable part of Christian church liturgy. The monks that ran the early hospital planted vineyards nearby and made their own wine. While such practices were widespread in ancient Europe, over the centuries wine and patient care gradually separated from each other, except in Strasbourg.

Located in Alsace, a region of France that borders Germany, Strasbourg is a city of 275,000 people, the largest in the area. Having repeatedly changed hands between France and Germany, the entire region contains a mix of both cultures, this also extending to its wines. Of the seven principle varietals grown in the area, the two most common, Riesling and Gewürztraminer, are German varietals. The cool northern climate of Alsace is mostly conducive to white wine. The others include Pinot Gris, Sylvaner, Muller-Thurgeau, Pinot Blanc and Muscat.

The only red varietal of the region is Pinot Noir, a French grape. The quality of Alsatian Pinot Noir used to be poor compared to Burgundy, its French home, or the upstart Pinots of the New World. The cool climate of the area resulted in thin, indistinct wines. Nowadays, thanks to global warming Pinot Noirs are getting better. 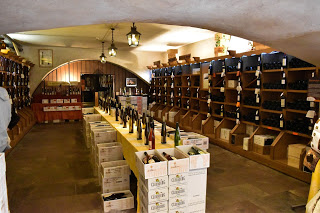 We discovered all these Alsatian varietals sold at the wine shop beneath the hospital, under the hospital’s own label, along with selections from Bordeaux, Burgundy and Rhone. Prices were reasonable, most Alsatian wines around 10-20 Euros. 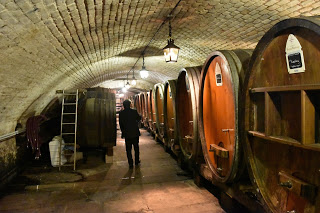 A cave complex behind the shop contained forty ancient wine barrels, large and ornate, in which the wine sold here is aged. A friendly attendant explained that the hospital contracts with various winemakers who bring a select portion of their yearly product and age them in these barrels for six to eight months. After bottling, the proceeds are shared between the shop and the winemakers. The annual output of the operation is around 23,000 cases. The profits are returned to the hospital which is owned by the city. 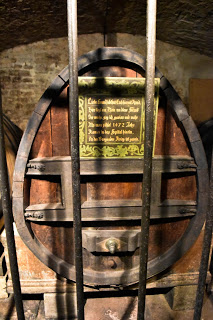 As we toured the wine casks, each labelled with their content, we were amazed to discover the oldest white wine in the world, from the 1472 vintage (can anyone remember that one?). It was sampled three times, each tasting a historic occasion onto itself: 1576, for a Swiss delegation, 1716, on the occasion of the renovation of the hospital, and 1944 by General Lelerc, liberator of Strasbourg from the Germans during World War II. The wine was finally abandoned in 2015 due to irreparable leaks in its barrels. 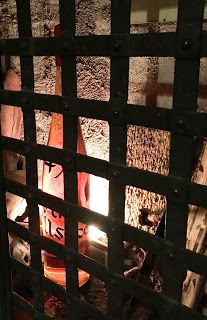 Nowadays a small sample resides in a tall back lit bottle, locked within a Medieval cage.

We tasted two Pinot Noirs with the Hospices Strasbourg label, from the 2014 and 2015 vintages. They came in the same tall, thin bottles as their white counterparts and were Burgundian in style. The 2015 was fruity, easy drinking, well balanced and food friendly.

The 2014 was more serious, with an earthy nose, high extraction, supple tannins and a long finish. Alsace, we realized, has indeed come a long way with this difficult varietal.

We regretted not having more time to explore this remarkable cellar, especially since we were unaware that it took a two week advance reservation to get a proper tour and tasting.

Strasbourg has countless tourist attractions, many common to all European destinations, an imposing cathedral, countless churches, charming architecture, tour boats cruising scenic canals that encircle the old city, ubiquitous restaurants. Yet this remarkable hospital winery is not listed on any A-list of things to do there. 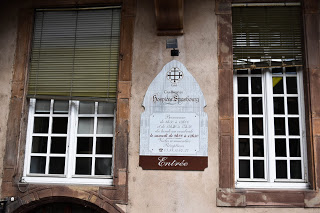 The Cave Historique Hospices Strasbourg is a mere footnote in most guide books. For those interested in wine however, it should be a must see.