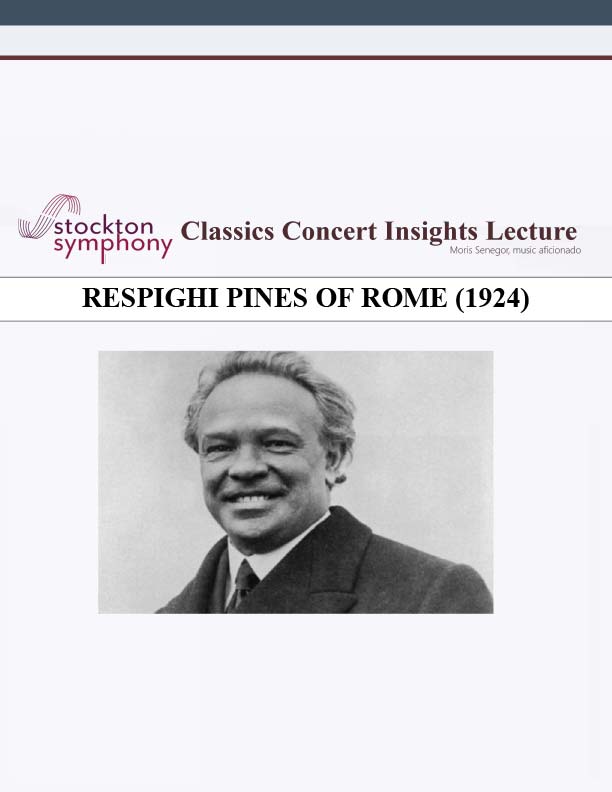 Single movement work for orchestra in which a poem or program provides the basis for musical narrative.

Children are at play in the pine groves of the Villa Borghese, dancing the Italian equivalent of “Ring around the Rosy.” They play at soldiers, marching and fighting. They twitter and shriek, like swallows at evening. They come and go in swarms. Suddenly the scene changes.

We see the shadows of the pines, which overhang the entrance of a catacomb. From the depths rises a chant, which echoes solemnly, like a hymn, and then is mysteriously silenced.

There is a thrill in the air. The full moon reveals a profile of the pines of Gianocolo’s Hill. A nightingale sings.

Misty dawn on the Appian Way. The tragic country is guarded by solitary pines. Indistinctly, incessantly, the rhythm of innumerable steps. To the poet’s fantasy appears a vision of past glories; trumpets blare and the army of the consul advances brilliantly in the grandeur of a newly risen sun toward the Sacred Way, mounting in triumph the Capitoline Hill.

This movement is a dramatic march, evoking an ancient Roman army approaching at a distance and at the end, passing by the audience. The movement is formless and in two parts.

PART I: Misty dawn on the Appian Way

A RECOLLECTION ABOUT THE AMERICAN PREMIERE OF PINI DI ROMA FROM ELSA RESPIGHI, 1978

“One always got the impression that this great conductor (Toscanini) always wanted to be a composer himself. He was certainly a great interpreter, but I am sure his often strange and harsh behavior towards some of his contemporaries came from that frustration of not being able to create music himself.

(The premiere of Pini di Roma) was…an unforgettable evening. Carnegie Hall was decorated from top to bottom with flowers and Italian and American flags. In the audience were famous artists and personalities. Toscanini delivered an excellent performance of Pini di Roma and he had to return four or five times to the podium to acknowledge the applause, but without Respighi.

I knew that there had been a dispute between him and the maestro and I told Ottorino that since everybody knew that he was here, he should go out too. He finally agreed to accompany Toscanini, causing tremendous shouting and cheering.  They had a standing ovation from thousands of people. The players improvised fanfares on their instruments. I had never before experienced such a tremendous physical sensation.

But the curious fact about Respighi going out to accept that applause was, that Toscanini had murmured to him, putting his hand over his shoulder, ‘Come Respighi, let’s go out, do share my success!”

FROM A SERIES OF INTERVIEWS BY ADRIANO BASSI